Dating in the 21st century isn’t easy. Well actually, it’s so easy that it’s kind of hard. All around you there are shiny, happy people going on #baecations with their #mcm. It can feel like you’re the only one who’s single! And with one click, you have access to pretty much everyone on Earth. With another click, you can filter those billions of options down to your exact specifications: a 6’2″ Yankees fan extrovert with hazel eyes, a dog, and a J.D., who practices yoga and lives in a loft downtown, no roommates.

The problem is that while we think we know who we want to be with, we don’t have a bloody clue.

Over the years, I’ve had the distinct pleasure of trying a wide variety of online dating sites. Because of my hobbies, you won’t find me “out” much, and because I feel more confident writing than speaking, online dating feels less intimidating to me than say, being set up by friends or meeting someone at a bar.

Mistake 1: Scrutinize their self-summary. The problem with this is that not everyone is like me – some people suck at writing and are incredibly gifted socially. Those people can seem stupid or boring online because they don’t have a darn clue what to write.

You definitely still want to read their self-summary thoroughly, but take it with a grain of salt. Whether it’s lengthy or brief, just take the information they share for what it is – a potential conversation starter.

Mistake 2: Form an opinion based on their pictures, like on Tinder. “Oh, they’re all selfies, they must not have any friends.” “Ugh, in a group of guys? Obviously a party animal.” This strategy just isn’t fair. You can make up a story about a person based on some snapshots, but how accurate are you likely to be? And it makes you wonder what kinds of assumptions people are making about you in return.

Pictures are obviously a useful tool to judge whether you find a person attractive or not. But leave it at that, and don’t read between the lines.

Mistake 3: Carry on a conversation with anyone who starts one. This is  time-consuming and I felt a bit of guilt when I wasn’t interested.

You don’t owe it to anyone to have a conversation with them! Reply only to the people who pique your interest. If at any point the conversation loses luster, don’t feel bad about telling them, “Hey, I’m not feeling a connection between us. Best of luck to you!” 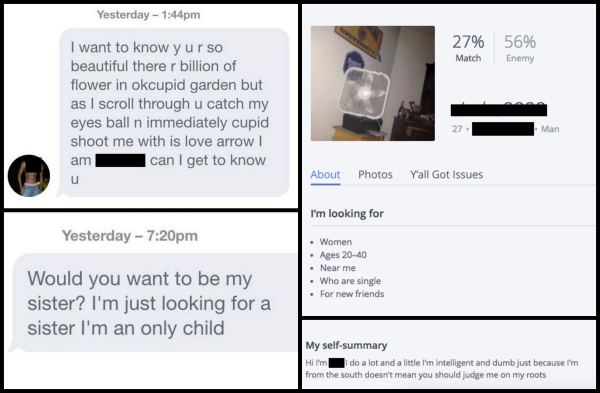 ACTUAL messages I’ve received and profiles I’ve seen from online suitors. A box fan as a profile pic?! Come on!

I’m sure you can guess that different strategies = mixed results and no long-term success. But I have learned some things along the way that could be helpful to fellow online daters:

Online dating tip 1: If they seem like a jerk, they probably are. If their profile is written with mostly negative statements, like, “Not looking for a girl with baggage. If you’re a cheater and liar, move along,” RUN. Instead, look for profiles that talk more about what they ARE looking for.

Online dating tip 2: If their first message to you is “hey”, “ur hot”, “sup lol”, or similar, you might not want to waste your time. If they can’t put in a little effort to come up with something interesting or funny to say to catch your eye, why bother?

Online dating tip 3: Don’t be afraid to reach out to someone first! If you’re interested, life’s too short not to give it a shot, right?

I’m single, and I’m starting to realize that’s okay for now. (But if you know any intellectual 30-something fellas with blue eyes who lift weights, holla atcha girl. Obviously.)

Because there’s so much more to say, I’m going to start a series about my experiences with dating. Stay tuned for some memorable stories!

Did you know that I offer online dating coaching services? Find out more here.