As an Amazon Associate and member of other affiliate programs, I earn from qualifying purchases.
237shares

Since Beaufort is the second oldest city in South Carolina, it has a very rich history, but what gives the town its uniqueness and charm is that it’s ‘quietly historic’. Beaufort history is simply part of Beaufort life; there’s nothing in your face about it. Even the Beaufort historic district itself feels unspoiled. As you visit landmarks, it seems as if you’re one of a secret few who have discovered its hidden treasures.

Beaufort might be quietly historic, but whispers contain the best kept secrets, and Beaufort’s secrets deserve to be shared. It’s a genuine treasure on the South Carolina coast. 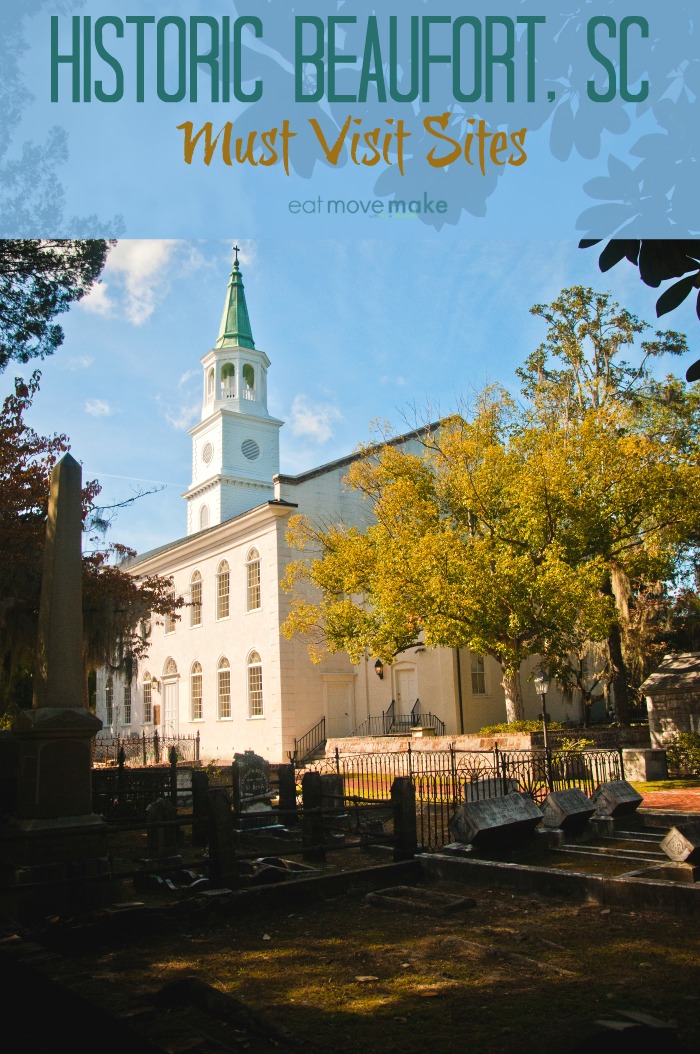 Beaufort Historic District and Beyond

Beaufort’s historical significance lives and breathes through its natural harbor location, Antebellum mansions and plantations, tabby wall remains,  and the continued influences of Gullah culture and cuisine. A vacation to Beaufort wouldn’t be complete without seeing a little bit of it all.

To be sure you’re seeing all the highlights, you may want to consider taking a walking, driving or horse-drawn carriage tour. It’s the best way to hear the stories that go with the historic landmarks and stately antebellum homes in Beaufort’s historic district. I’ve pointed out (see how I did that) a few of my favorites here.

Secession House – Once owned by Edmund Rhett,  this home was used as a secession meeting place. Because it’s a private home, I can’t verify this, but we were told on our Southurn Rose Buggy Tour that Rhett and his supporters wrote messages on the basement walls in their blood. When the Union took over Beaufort, they wrote their own bloody messages on the walls in return. (I have one eyebrow raised about it, but it’s an interesting story.) 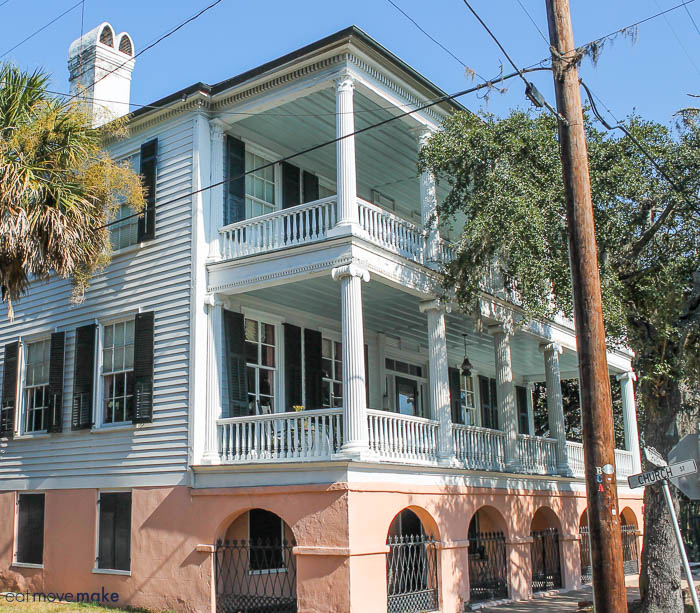 Parish Church of St. Helena – One of the oldest active churches in the country, it was founded in 1712 and was attended by many of Beaufort’s most prominent and wealthy citizens. The cemetery is home to “Tuscarora Jack”, two British officers who were killed in the battle of Port Royal at Gray’s Hill, and two Confederate generals. During the Civil War, the church was turned into a hospital, and supposedly tombstones were used as operating tables. Our tour guide told us there are two tombstones side by side in the cemetery that bear the marks of those early surgeries. (Insert another eyebrow raise here, but… it’s a fun story.) 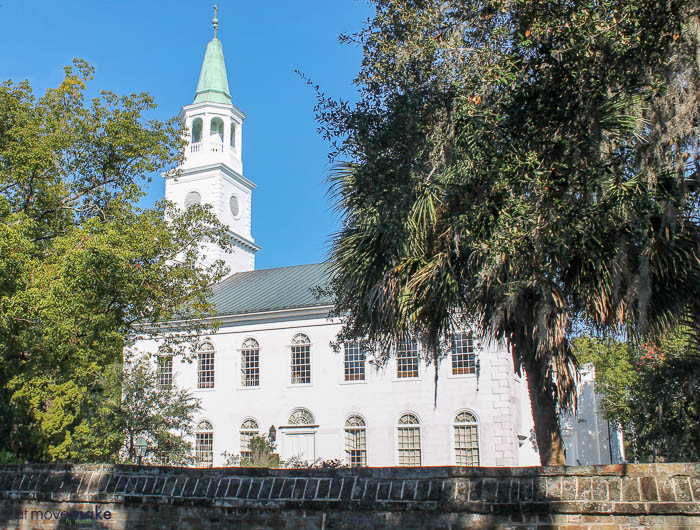 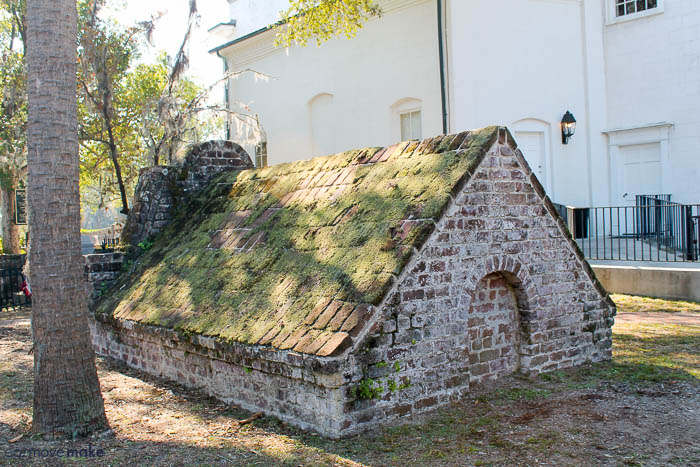 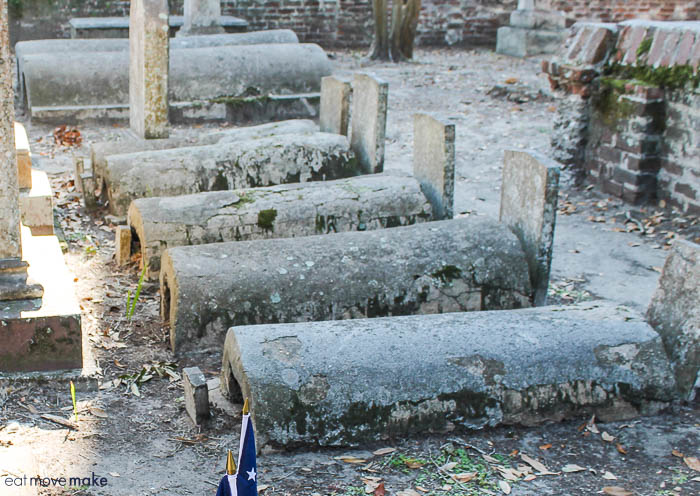 I’ve never seen graves like this before.  I’d love to know the story behind the curved stone covering.

Robert Smalls House – Robert Smalls was born into slavery, and worked in this home for most of his enslaved years until being sent to work on the CSS Planter. He learned everything he could about commandeering the ship, and on May 13, 1862, in an act of incredible heroism, he sailed the ship to freedom and turned it over to the Union forces, freeing himself and his crew and their families from slavery. After the war, he bought his former master’s home in Beaufort. 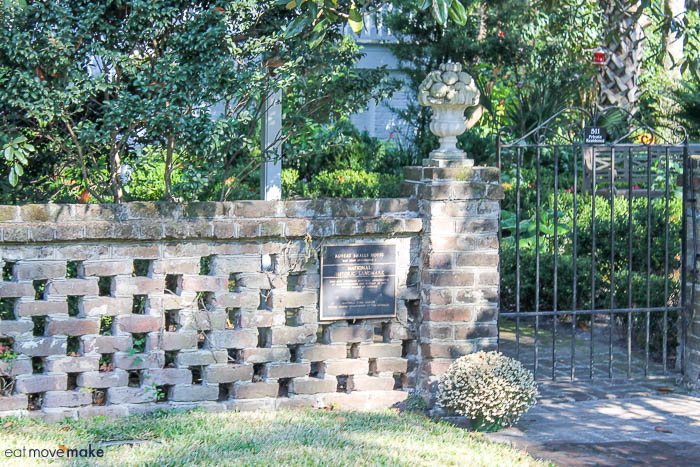 Tabernacle Baptist Church – This beautiful church watches over the resting place of Robert Smalls and his wife. 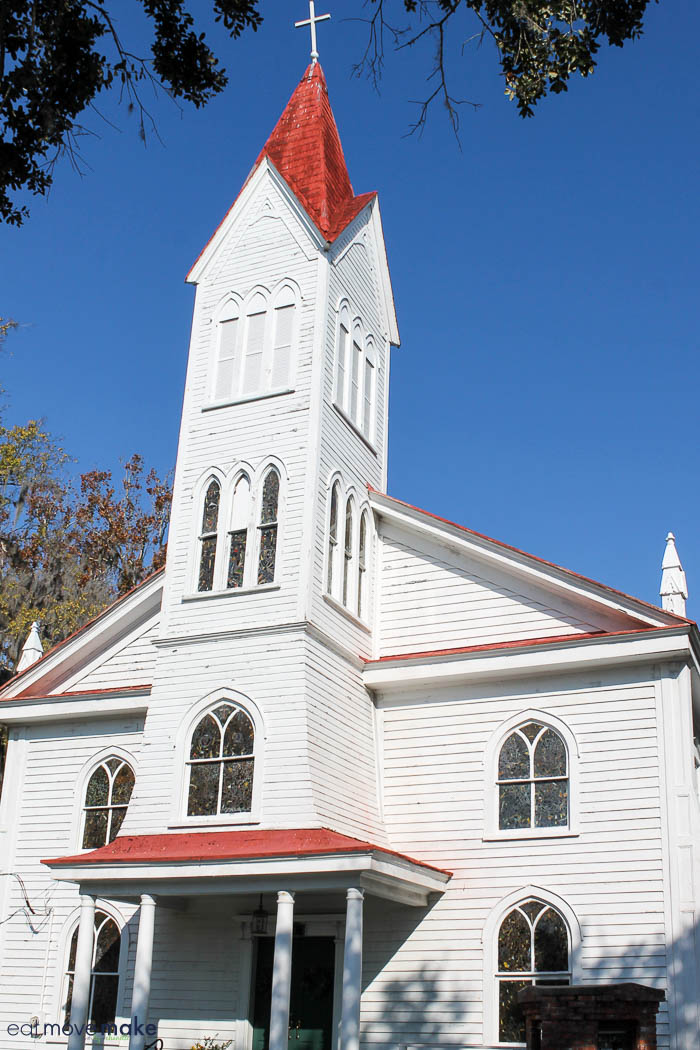 First African Baptist Church – This was built after the Civil War by freed slaves who purchased the land and built the church together. 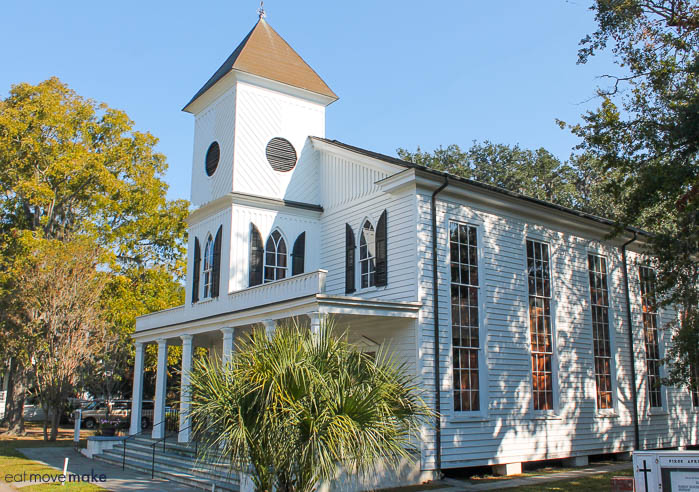 Anchorage 1770 – This absolutely stunning and completely renovated 18th century Victorian was built of tabby, and is now a luxury B&B with excellent cuisine.  Look for the glassed-in but exposed tabby wall inside the inn, and ask about the hidden rum bottle cubbies. 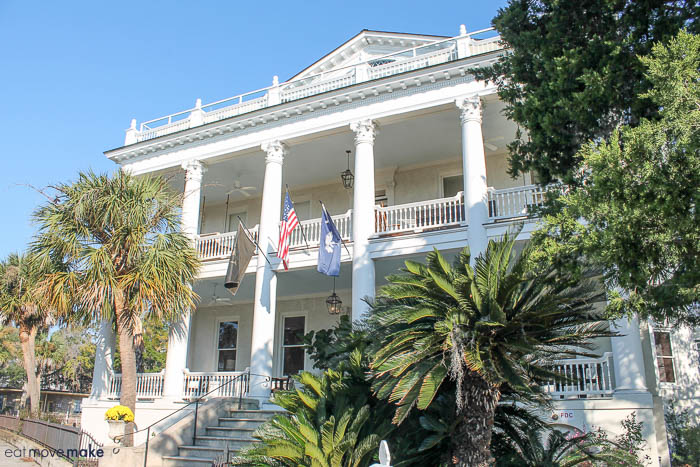 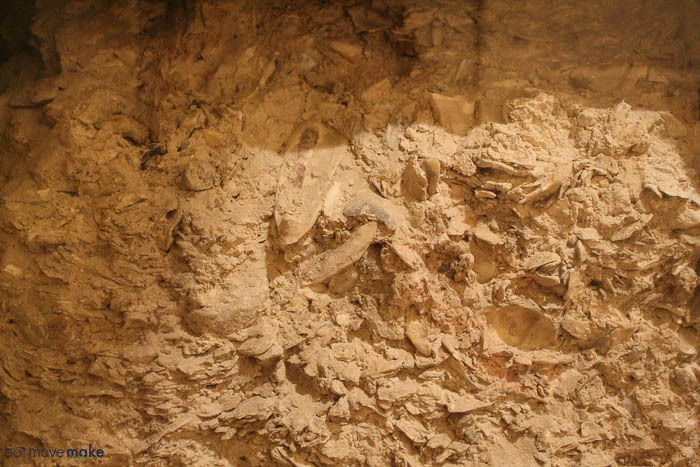 If you’re wandering around the Beaufort historic district, you can’t miss the goliath yellow tabby and brick Arsenal building in the midst of all the elegant homes. Take a few minutes and go into the courtyard where you’ll find two British historic cannons that were captured and seized by Union soldiers. 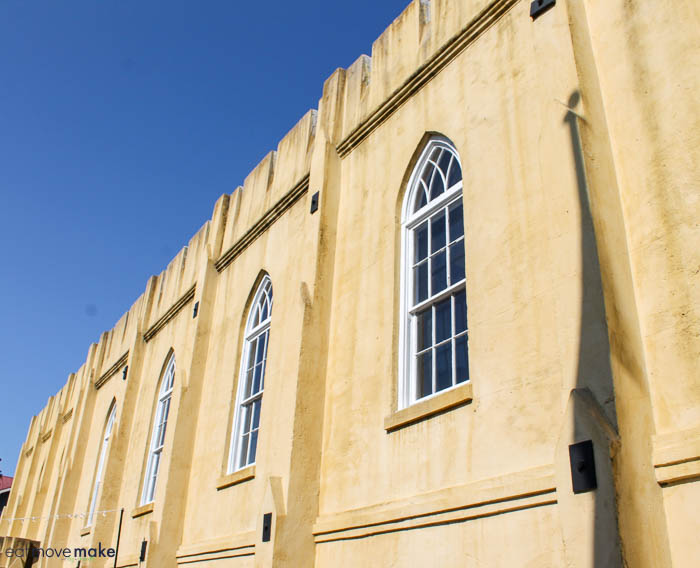 The Beaufort History Museum is housed inside the Arsenal building, and for a modest admission fee, a docent will take you through Beaufort’s history as you view the exhibits, although you’re welcome to browse on your own. 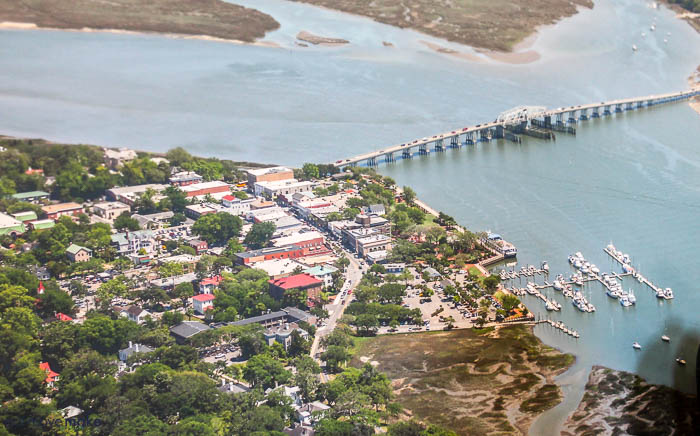 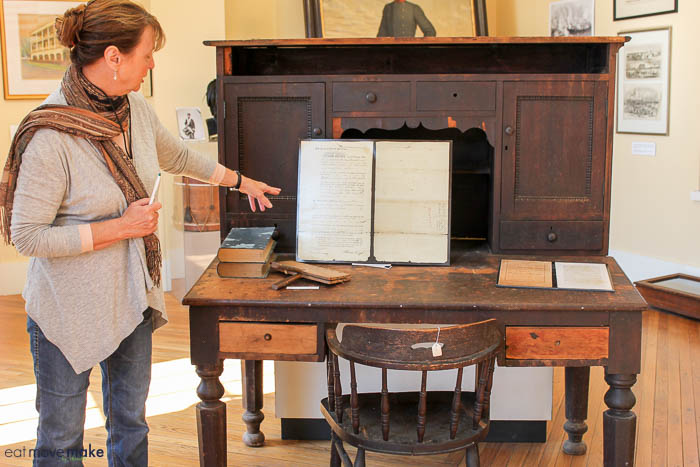 St. Helena Island is home to the Penn Center, site of the former Penn School. When the plantation owners fled the island after the Civil War, the freed Gullah Geechee people remained, and the Port Royal experiment was designed to teach them to support themselves. Not only were students educated in the traditional sense, but they were taught valuable skills in farming and homemaking, health and money management.

The Gullah people continue to survive and thrive to this day, and in large part we can thank the Penn Center for all it has done and continues to do to promote education, historic preservation and social justice for African Americans. 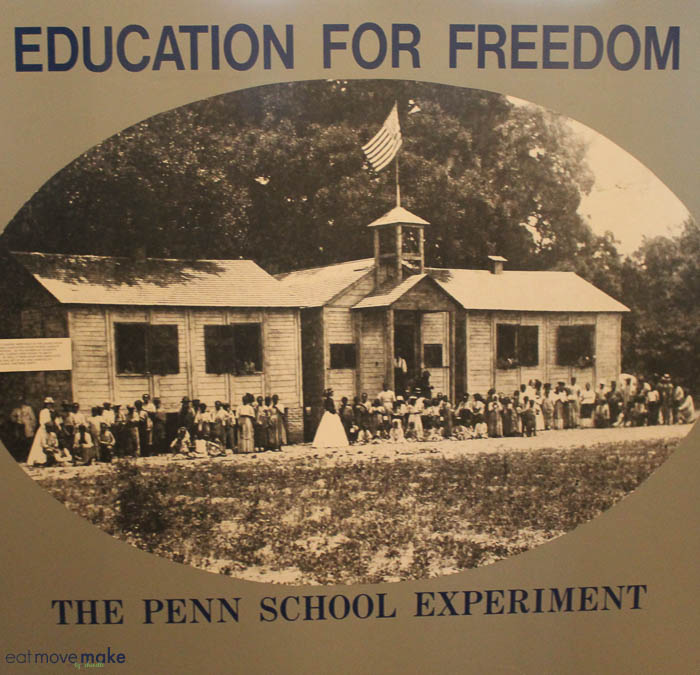 Later, the Penn Center served as a safe and secret meeting place for Dr. Martin Luther King, Jr. and his associates as they tirelessly fought for Civil Rights. This is where it’s thought he penned his famous “I Have a Dream” speech. 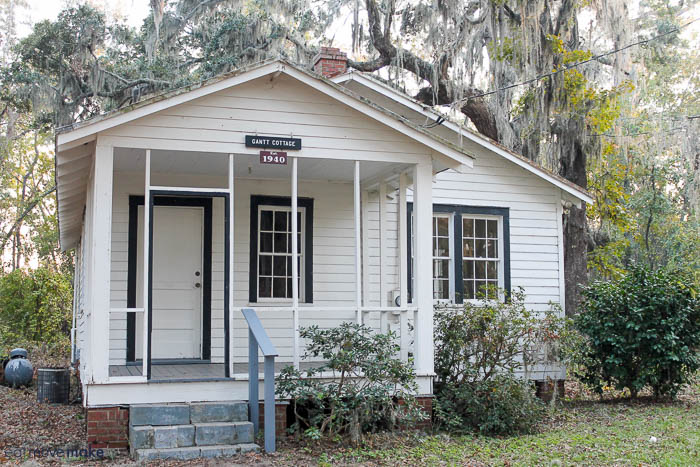 If you have a chance to stop by Gullah Grub on your way to or from the Penn Center, you can get a taste of authentic lowcountry Gullah cuisine. 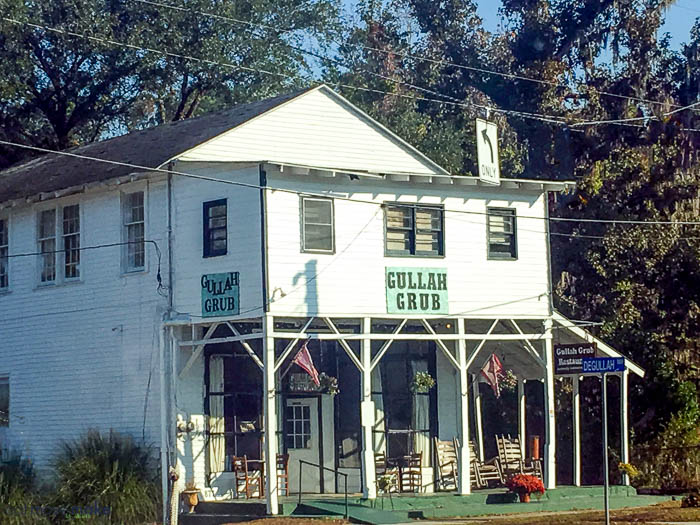 Read my other posts on Beaufort, SC, and visit beaufortsc.org for more travel information: