Confession: I’ve done some walking, but I know I’ve done a lot more talking than walking.

Ok, the truth is that I suck at giving back.

My intentions have always been good, but I’m also human which makes me selfish and lazy. And admitting it is humbling and embarrassing.

I get inspired to help all the time, but actually following through on doing something…well, that’s where the “I suck” comes in.

But I saw a chance to redeem myself since I was partnering with Coca-Cola Arctic Home to help those precious polar bears.

And I drink Diet Coke in obsessively refreshing amounts, so I thought it would be easy. But….

Confession #2: I couldn’t figure out how to donate, so I didn’t do it.  Awkward.

But today, I was determined to figure it out, and when I went to the Arctic Home website, it was spelled out perfectly. Either they made it clearer, or I’ve been an idiot.  Hush now.

So I did it. I texted my donation! It certainly isn’t enough to take away from the fact I’ve been incredibly lame at giving back this year, but it’s a start.

What are your favorite ways to give back? Or could you use some improvement, like me?

How to Donate to Arctic Home:

You can donate via text up to 5 times per month, and there’s no limit on online donations.

If your package code is from the limited-edition Arctic Home products, Coca-Cola will match your donation up to $1 million through March 15, 2012. 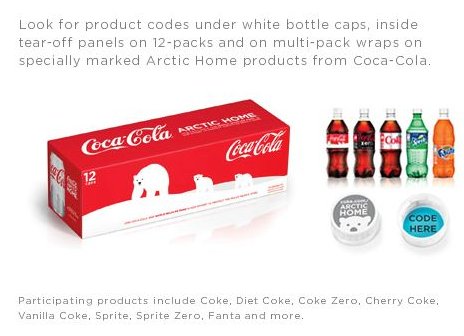 For more info on donating visit www.arctichome.com, and you can also donate points through mycokerewards.com

Compensation was provided by Coca-Cola, but Coca-Cola is not a sponsor, administrator, or involved in any other way with this post. All opinions expressed in the post are my own and not those of Coca-Cola.