As an Amazon Associate and member of other affiliate programs, I earn from qualifying purchases.
167shares

El Paso, Texas is often considered a drive-through city on the way to someplace else, and it must be because people aren’t really aware of its special treasures. Well, I aim to enlighten them, and one of the best reasons to stop and spend some time in El Paso is the El Paso Mission Trail.

The El Paso Mission Trail is a 9-mile historic route which runs between two of the oldest continuously operated missions in the United States (Ysleta Mission and Socorro Mission) and the San Elizario Presidio Chapel. The missions pre-date the California missions by 90 years, and an interesting fact about them is that they used to be south of the Rio Grande in Mexico, but  since the river has changed its course over the years, they are now in the U.S. 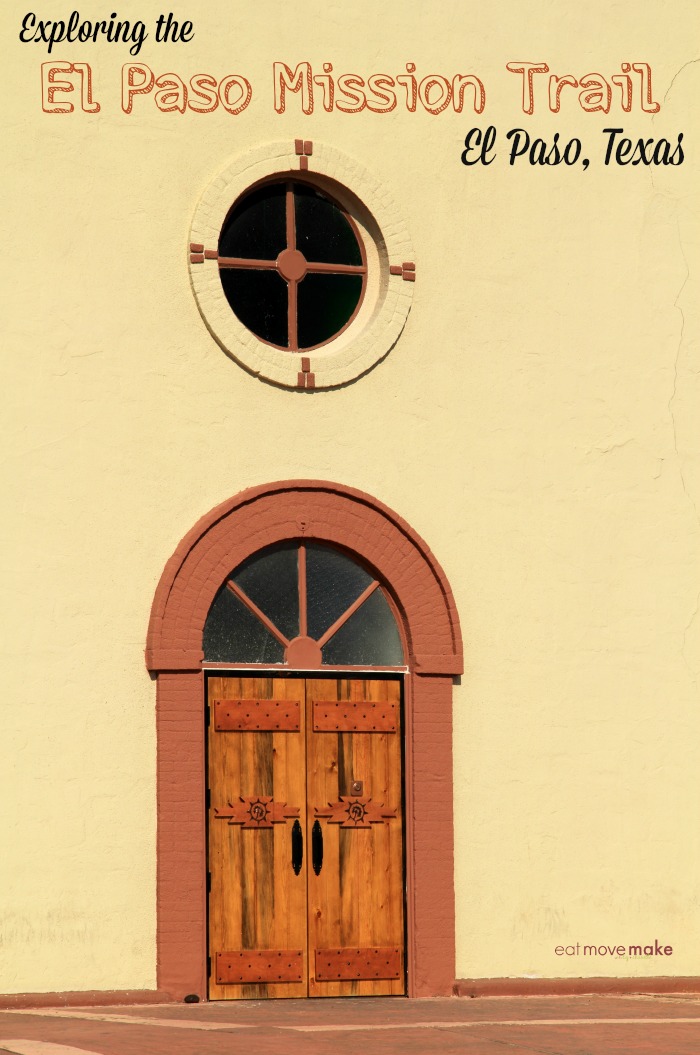 Start your excursion here by watching a short overview film about the Mission Trail, asking any questions you may have and picking up a trail map. Stop and take a close-up look at the mud bricks used to build the missions. They were made with a combination of dirt, water, and estiércol (manure). 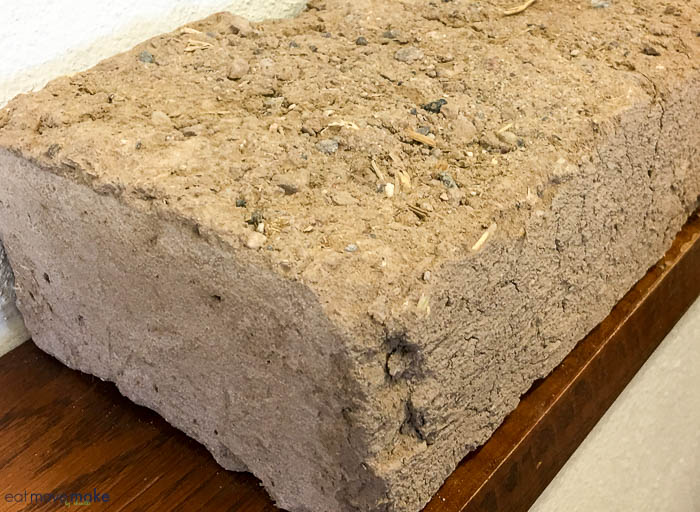 Be sure to check open hours for each of the mission trail stops, so you can plan your route accordingly.

The Ysleta Mission is considered the first and oldest mission established in the State of Texas, and although fire and flood have ravaged it through the years, continual rebuilding has allowed the mission to remain an active parish through present day.

The mission was built by Tigua Indians following the Pueblo Revolt, when forced to flee from  their Isleta, New Mexico pueblo and resettle. 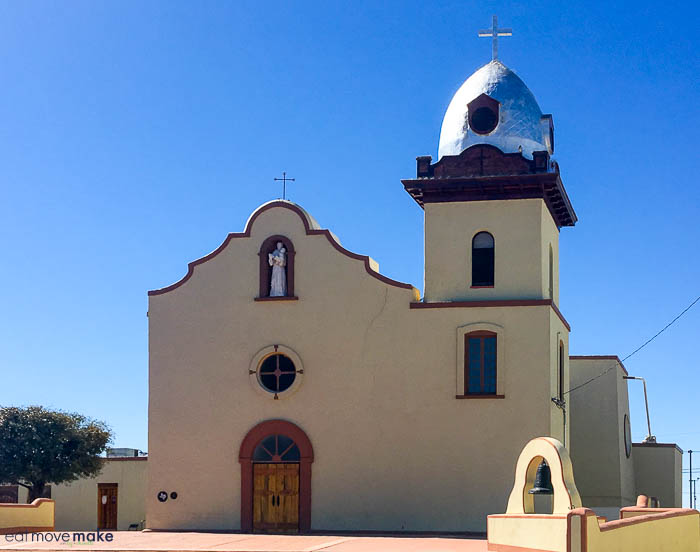 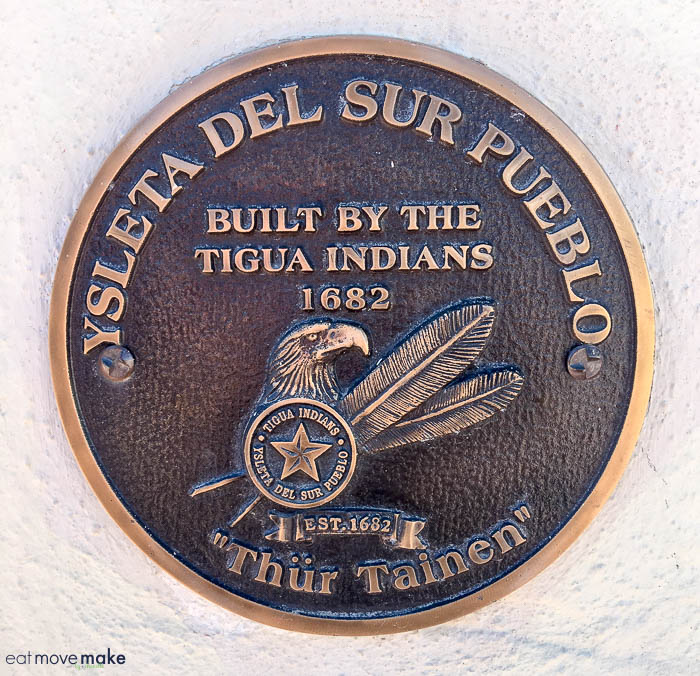 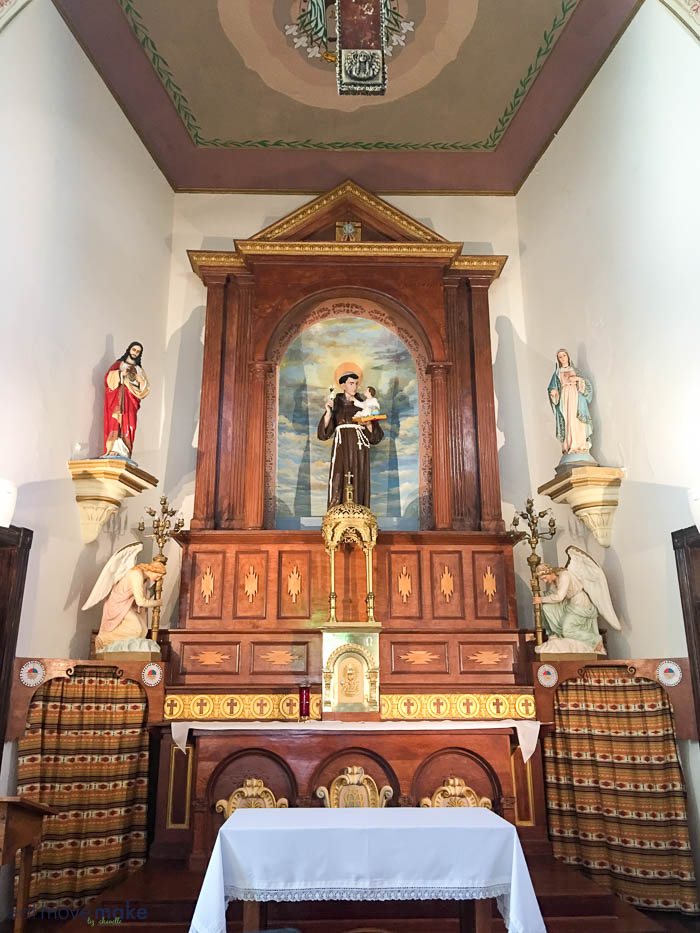 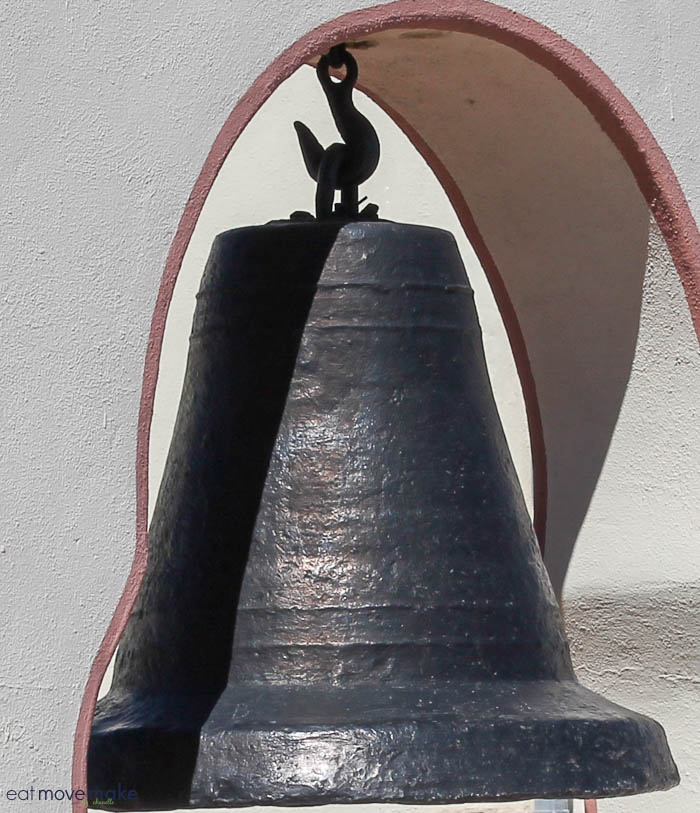 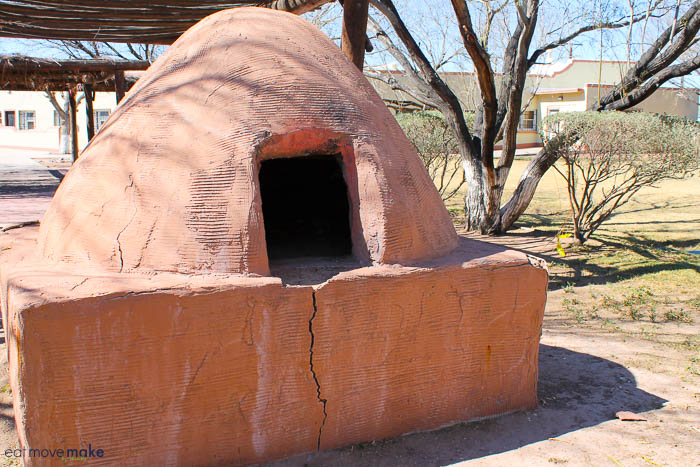 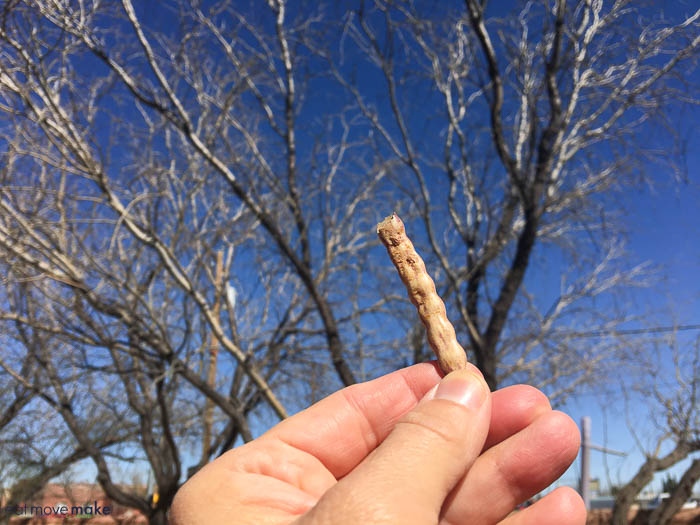 Look for the mesquite trees outside the mission. Mesquite pods were stone ground and combined with water and lard to make flour for gorditas 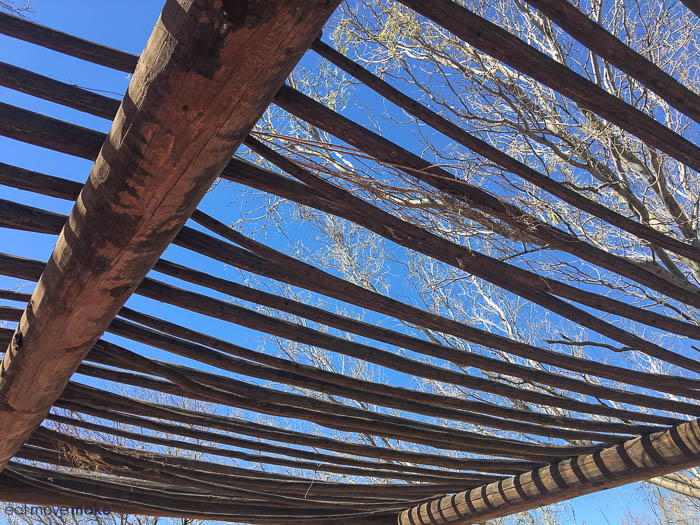 This branch canopy served as an early means of air conditioning

The Tigua Indian Cultural Center celebrates the rich culture of the Tigua Indians through history, art and dance in a variety of exhibits and events. On weekends, there are social dance demonstrations in the courtyard and on Saturdays, visitors can watch bread baking and taste fresh samples. There is also a wonderful collection of artifacts inside the building as well as a gift shop. 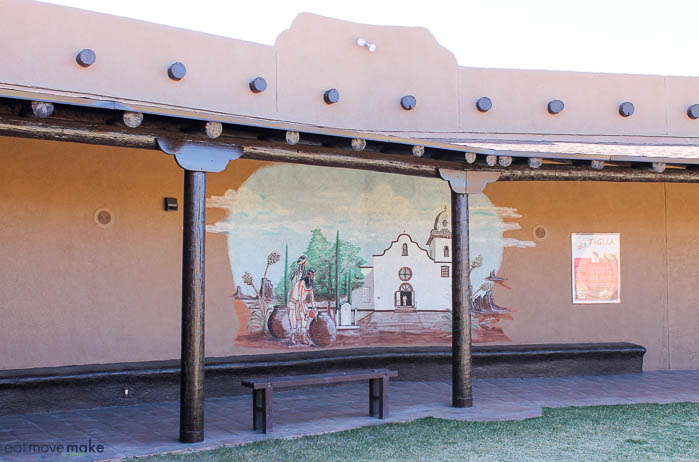 On weekends this courtyard is filling with dancing, singing and bread making 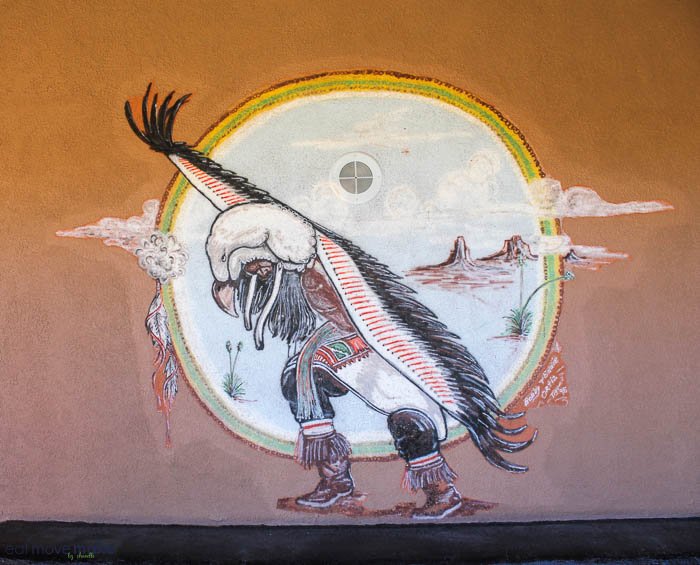 One of the beautiful murals on the courtyard walls 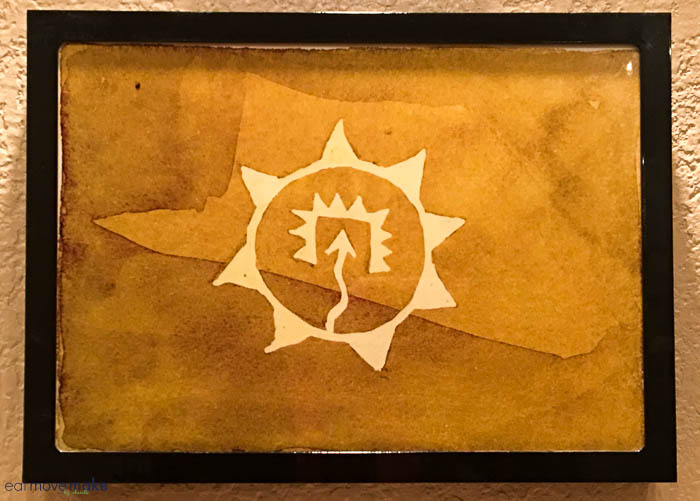 This symbol of the Sun People also represents a map to go home. The outside stands for the sun people, the inside is the village were they came from, and the arrow is the Rio Grande leading them home. 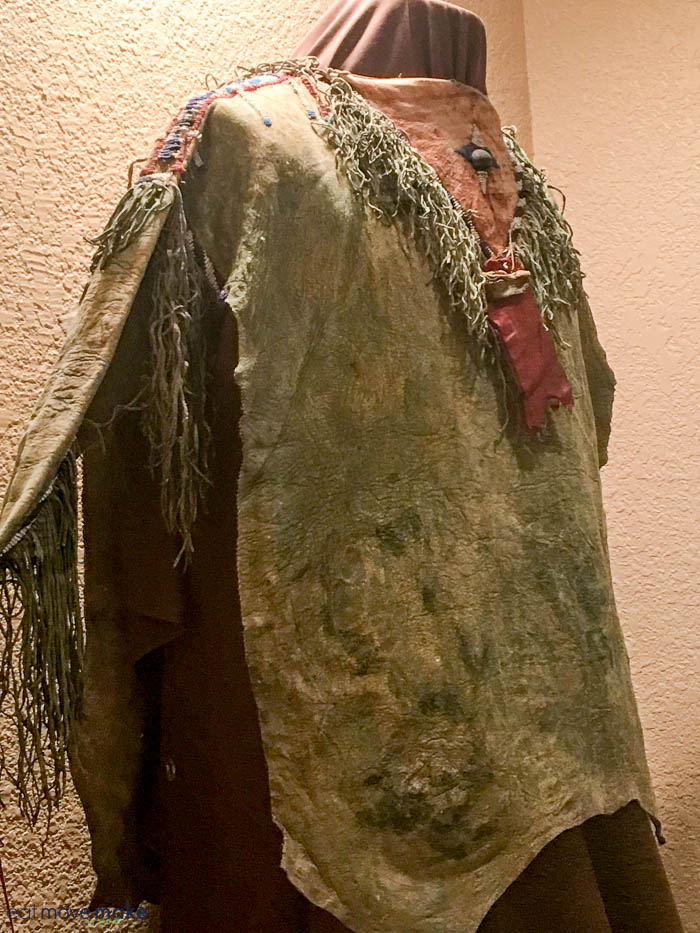 The Socorro Mission was built by Piro Indians after the Pueblo Revolt, and the exterior design represents a thunderbird while the interior is in the shape of a cross. 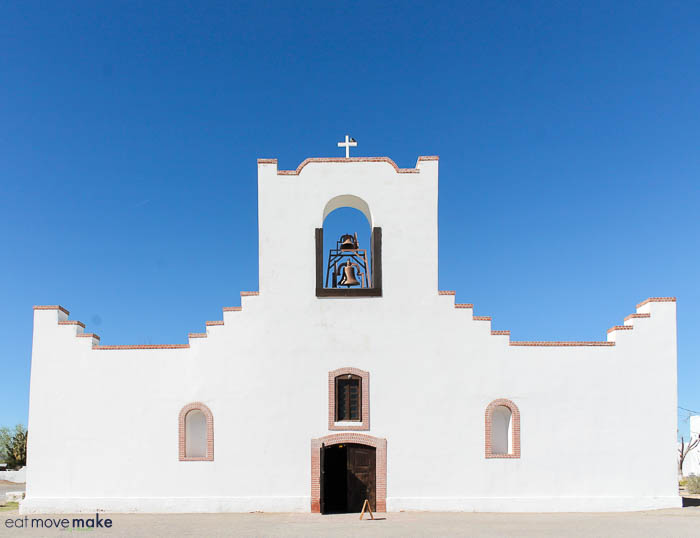 When you enter, be sure to look up and see the motif on the thick wooden ceiling beams (vigas). The x’s and o’s symbolize the four directions of the wind, and the center circle represents the family structure. The vigas are Texas state historical artifacts and were recovered from the original structure after a flood destroyed it. The smaller cross-hatched beams are called latigas. 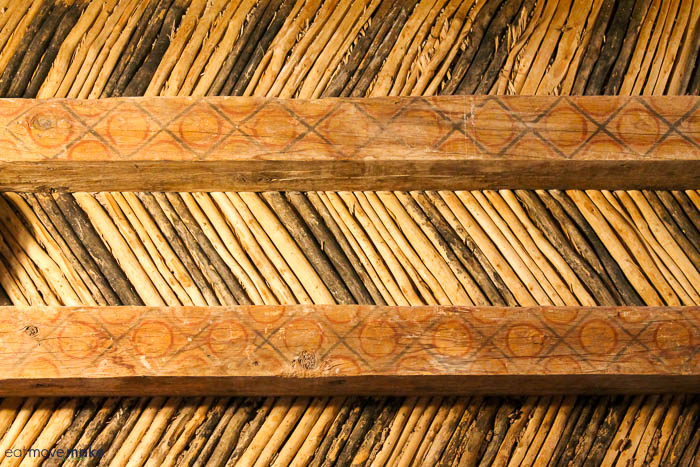 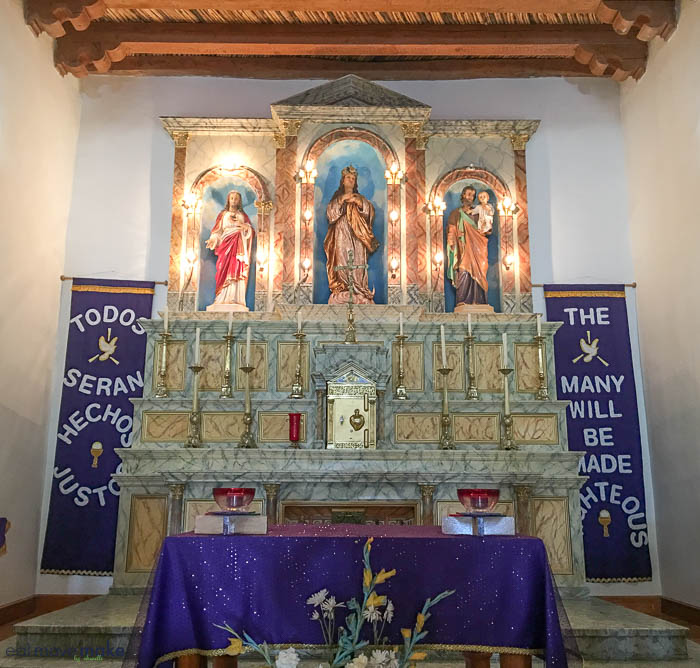 Take a good look at the altar. What appears to be marble is actually wood!

Inside the Socorro church rests La Pietà , a commissioned copy of Michelango’s original sculpture in Rome. La Pietà is the only artwork he ever signed. (Look on Mary’s sash.)

San Elizario was built as a military presidio, but also served as a chapel. Take the San Elizario walking tour which will take you to many interesting historic stops in this old village, including the old jail where Billy the Kid broke in to bust out a friend. 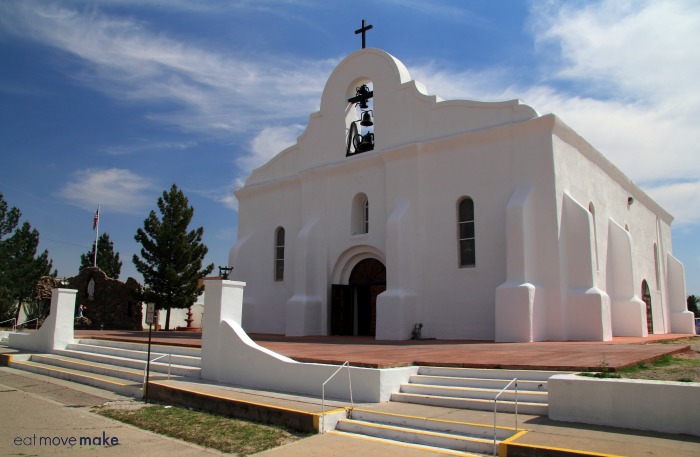 Allow at least a half day to visit everything on the El Paso Mission Trail. There are also many shops and authentic Mexican restaurants along the way that you may enjoy. For more destination info, check out http://visitelpaso.com/

Have you visited the El Paso Mission Trail? Did you have a favorite stop?