As an Amazon Associate and member of other affiliate programs, I earn from qualifying purchases.
223shares

The second I heard about a high wheel race in Frederick MD, I knew I had to see it for myself. Watching someone balance atop an old-fashioned high wheel bicycle (also known as a high wheeler, penny farthing or an ordinary) with its large front wheel and small rear wheel is quite the sight to see.

But seeing dozens of racers on their high wheelers at the same time? There’s only one place you can do that in the United States and that’s in Frederick, Maryland at the National Clustered Spires High Wheel Race. 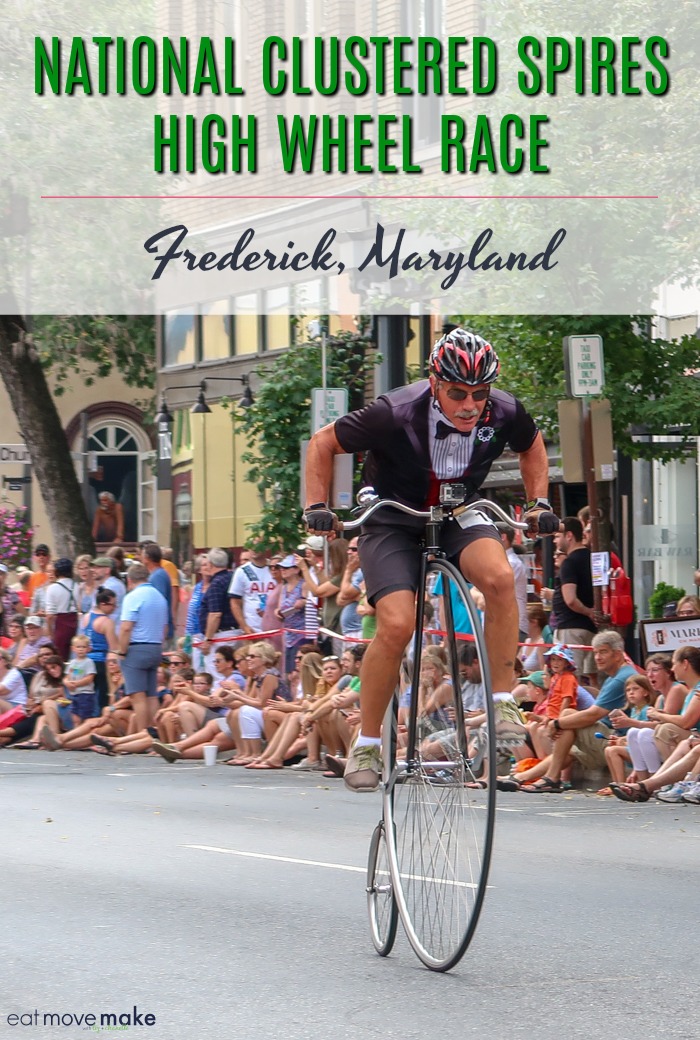 Did you know that the penny farthing was the first machine to be called a bicycle? The contraption was popular in the 1880’s for its comfort and speed, both of which were due to the large wheel. It was also considered to be an indication of wealth.

Of course, riding a high wheeler wasn’t (and isn’t) without its dangers. The rider sits high and nearly on top of the front axle, so he could easily be pitched forward head-first over the bike in an accident.

Thankfully, I didn’t witness any crashes as I watched the high wheel race in Frederick.

Before the race began, participants warmed up by casually riding the .4-mile loop criterium course through downtown Frederick. Because the participants were going slower than race speeds or just walking their high wheel bikes and chatting with the crowd, it was a great time to capture some photos and get familiar with them.

Some people wore Victorian-style period clothing and others wore modern cycling apparel. Some rode antique bicycles and some rode modern techy versions. Even wheel sizes varied from rider to rider. Anything goes and everything went! 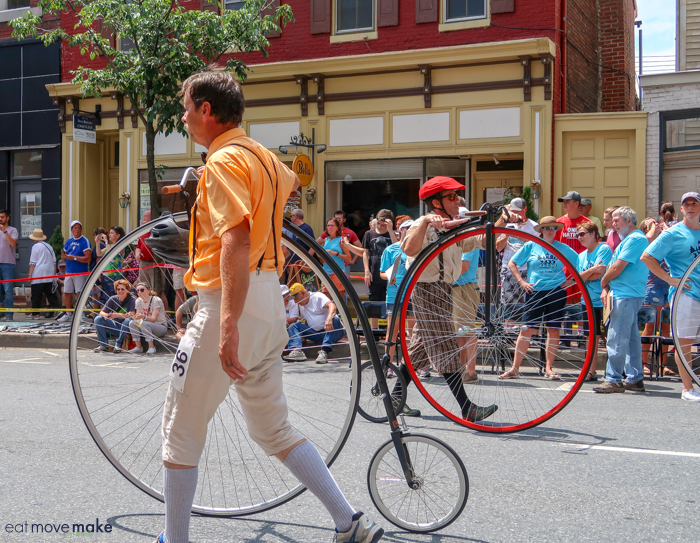 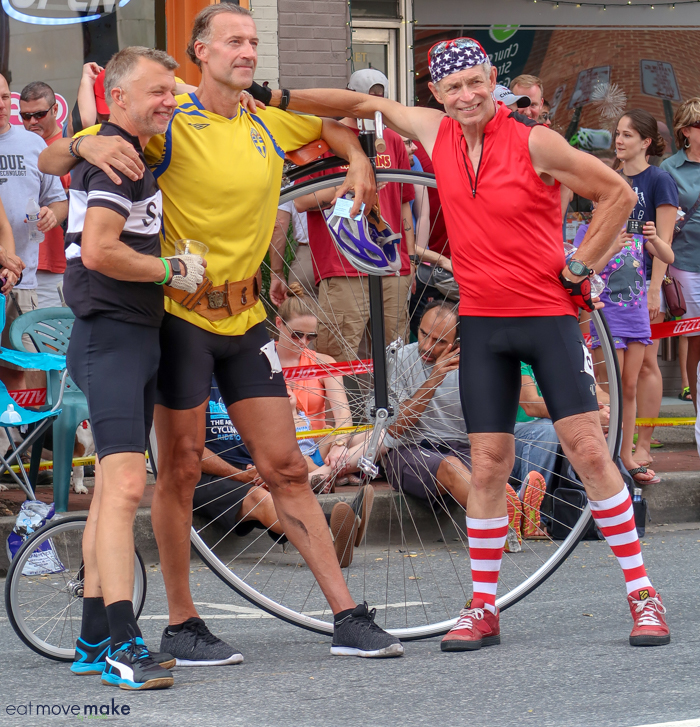 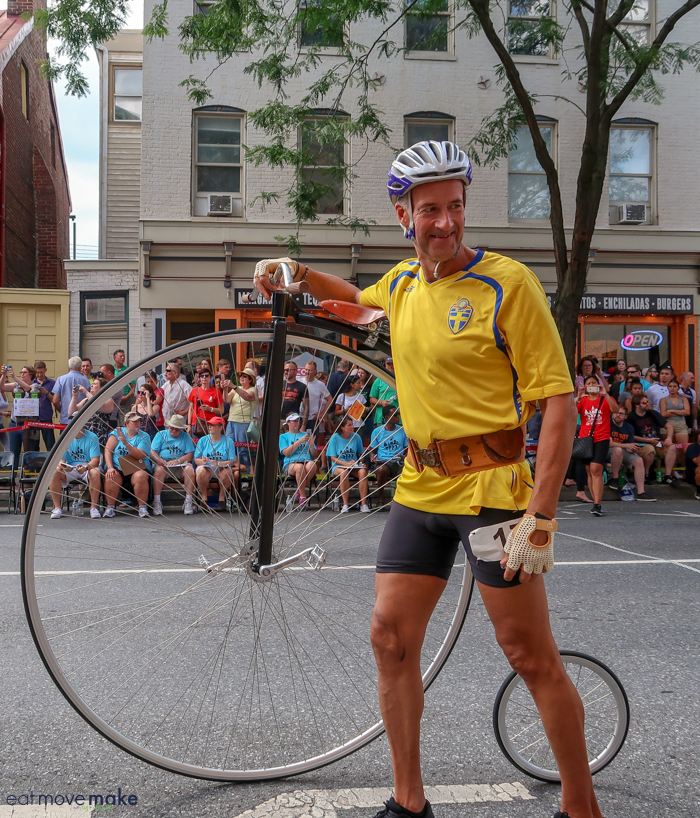 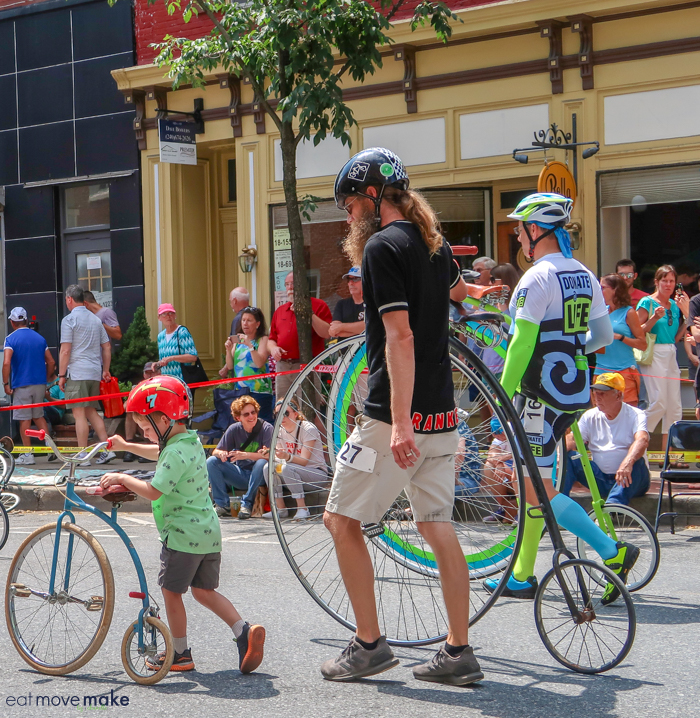 I chatted with Doug Mitchell and Barry Knight, two friends from Edmonton, Alberta and asked them how they happened to get into the sport of high wheel bike racing. Doug joked that he has friends in low places, but for Barry, it was simple intrigue when a neighbor bought a high wheel bicycle in 1972 and he caught the bug. The learning curve was painful, but they absolutely love the sport.

This year would be their second year in Frederick and they told me there were some very competitive riders participating, but they love the intimacy and camaraderie of the Clustered Spires High Wheel Race. They enjoy people asking questions, seeing the excitement of children and how high wheel bikes never fail to evoke a smile. 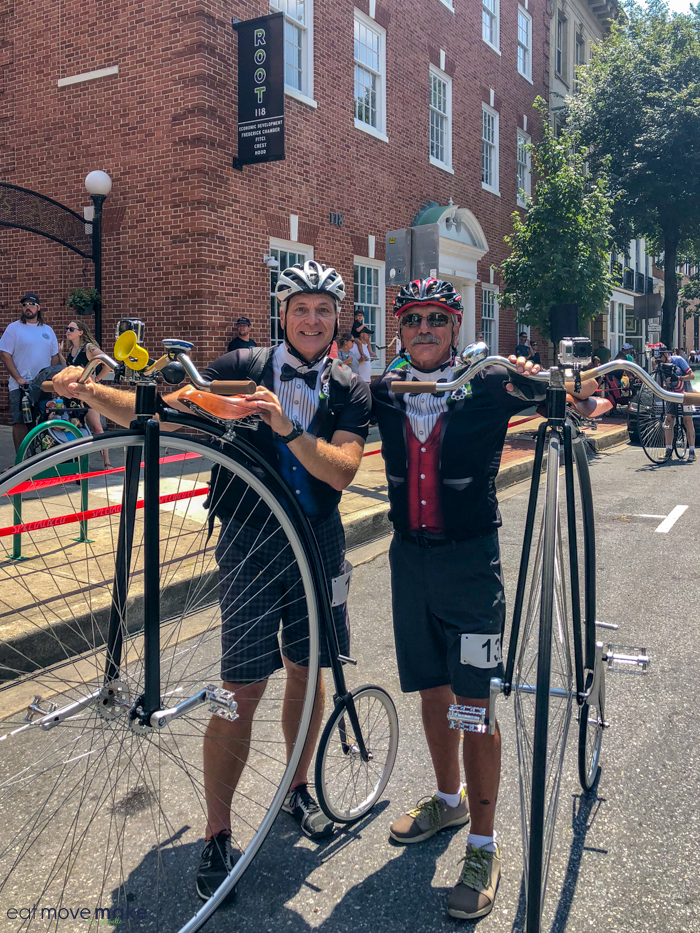 At the start of the race, the riders don’t just get on their high wheel bikes; they mount them. Using one foot to stand on a mounting peg, the rider scoots along and lifts his other leg to a pedal. They say that’s the easy part… I beg to differ. 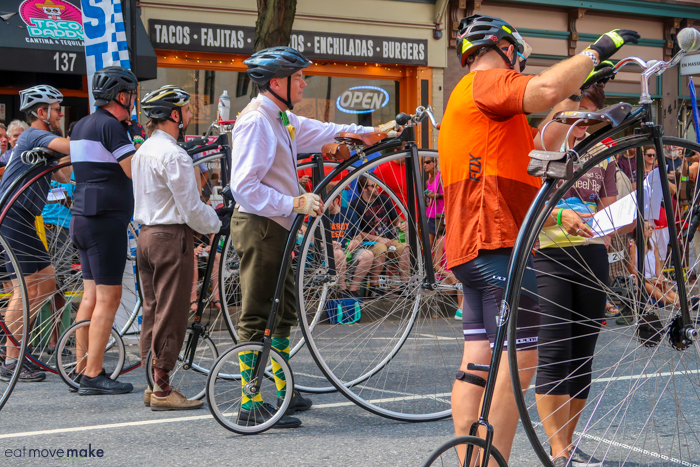 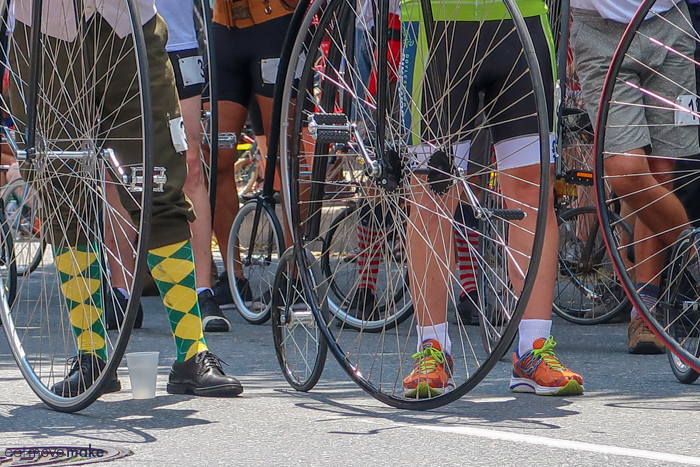 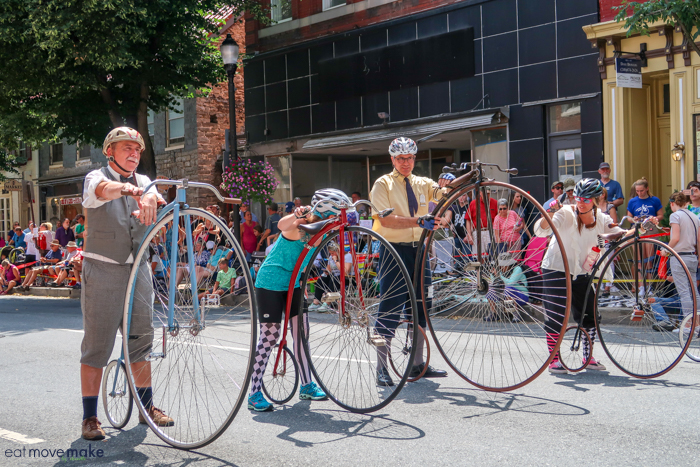 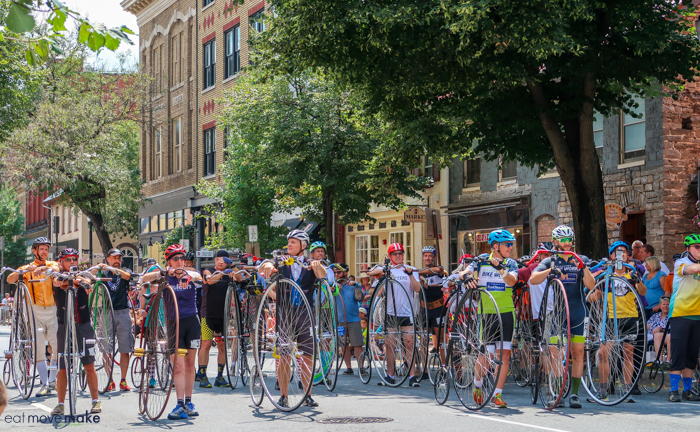 There were 37 racers split into two 20-minute preliminary heats and the top twenty (or so) finishers moved on to the final 30-minute race. 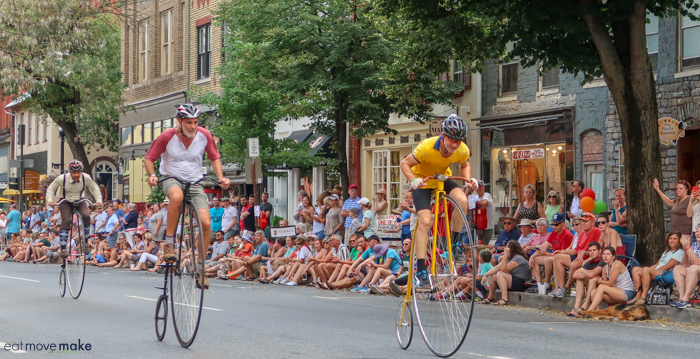 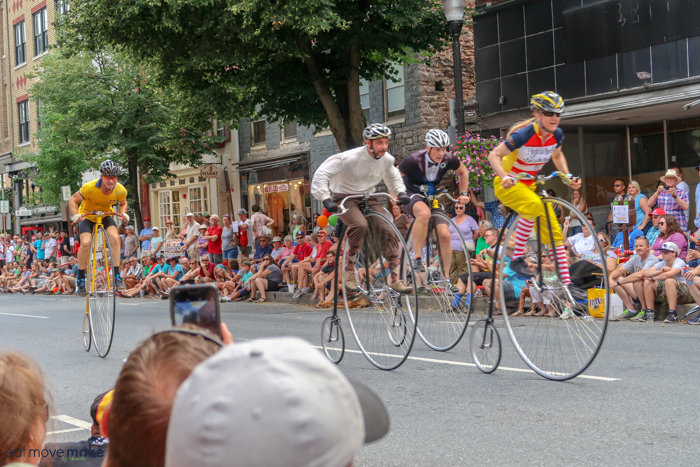 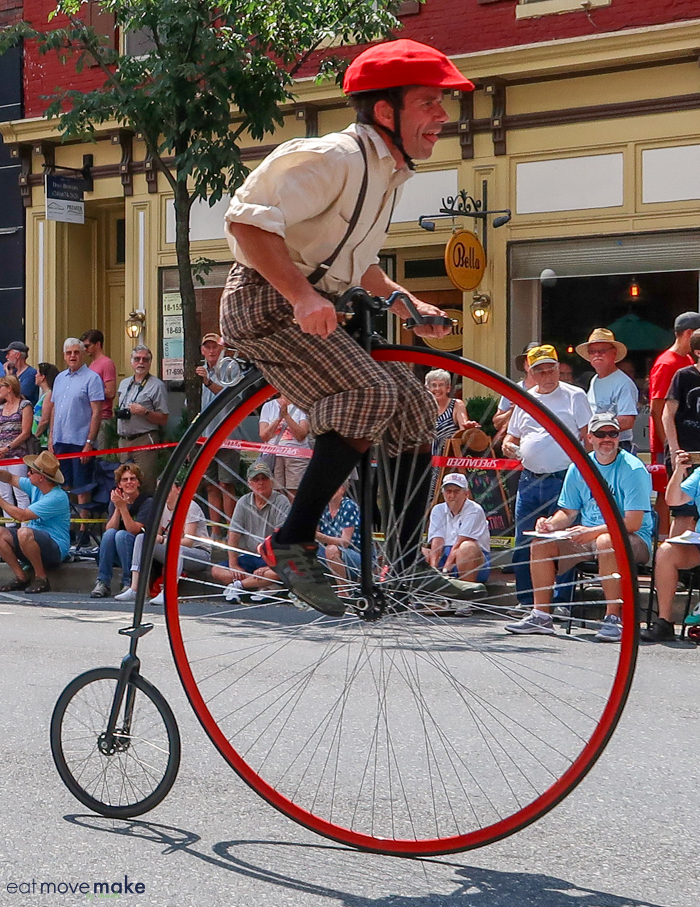 The winner of the race for the second time in a row was Per-Olof Kippel, a high wheel bicycle manufacturer from Sweden. 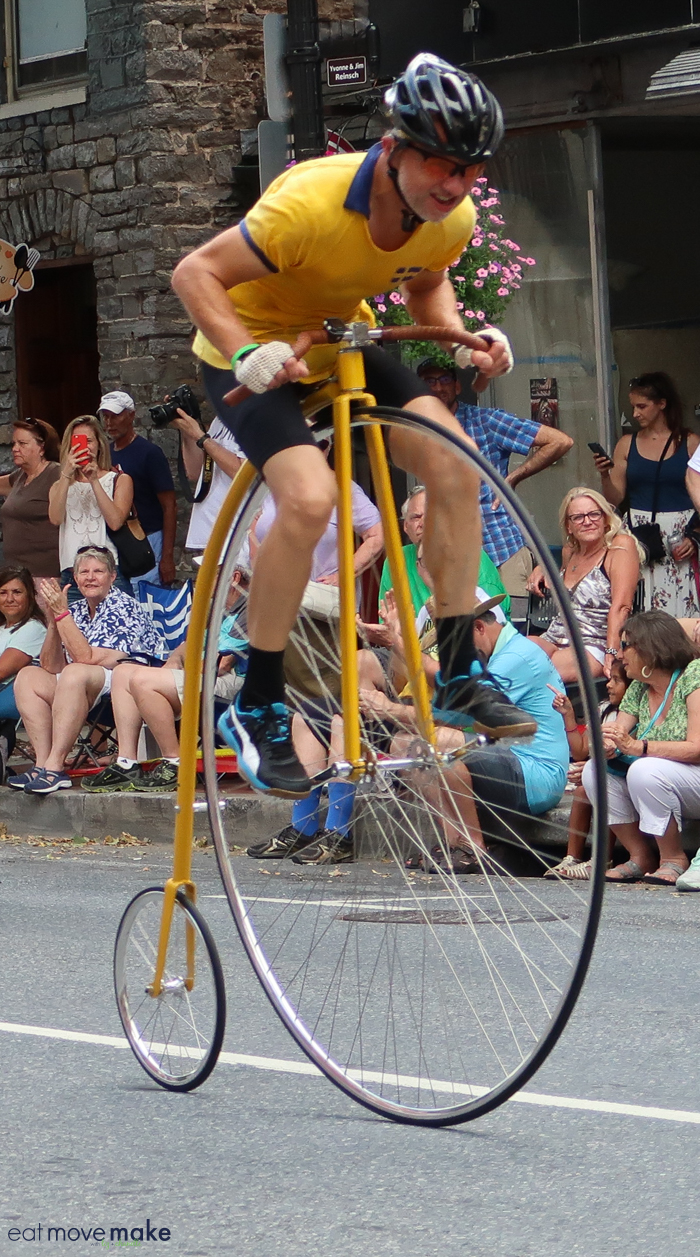 The winning trophy was perfectly designed – so much more fun than a cup! 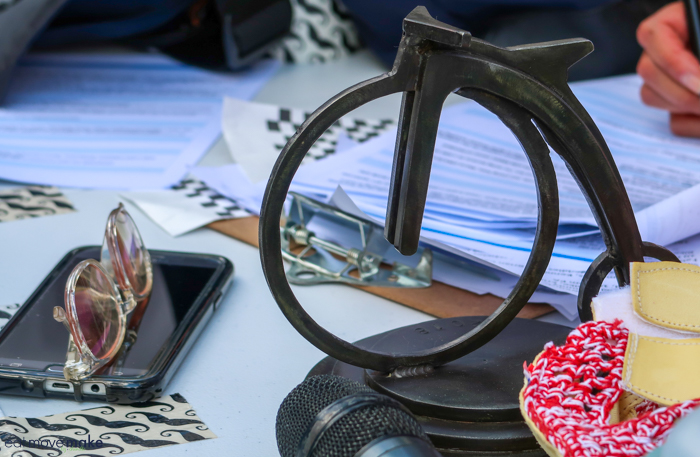 If you’re like me and prefer to watch rather than ride a high wheel bike, keep an eye out for the date of the next National Clustered Spires High Wheel Race in Frederick. It was my favorite travel activity of the year, and I would absolutely go again. In a high wheel heartbeat.

Thanks, Visit Frederick for tipping me off and hosting me for this fun event!