You are here: Home / Lifestyle / Jenga Boom – Quickie 48 Hr Giveaway
As an Amazon Associate and member of other affiliate programs, I earn from qualifying purchases.


The classic game of Jenga takes an explosive twist with new Jenga Boom! 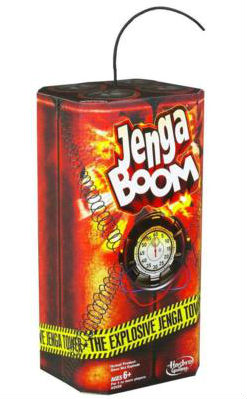 The game is still played with a stack of blocks, but in this version the blocks rest atop a toy detonator with a fuse, so the pressure is on to move quickly!

The fuse cord is pulled all the way out and the first person pushes the start button to set the timer a-tickin’. 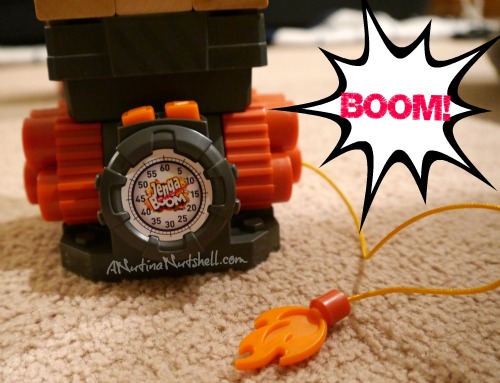 Then they hurry to remove a block, stack it on top, and quickly hit the timer’s stop button. 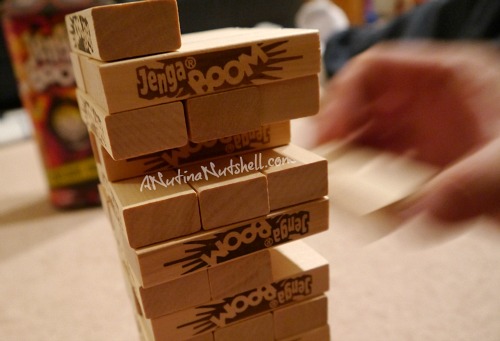 Play continues this way with each person starting and stopping the timer, until eventually the timer runs out on someone’s turn and…

BOOM, the whole tower of blocks comes tumbling down! 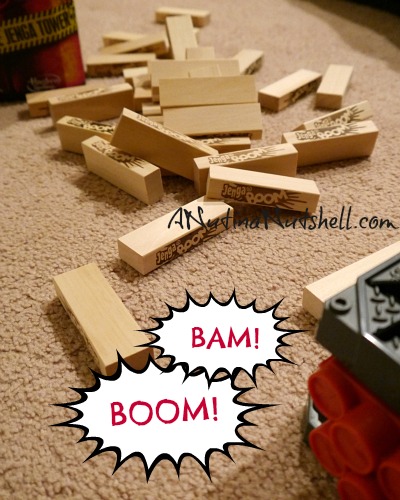 Technically, the tower could collapse on itself from the blocks being moved around during game play, but the timer isn’t really long enough for that to happen. Each time we played, we only had the chance to make two or three moves before the “explosion” came, and we had to start all over and rebuild the tower. 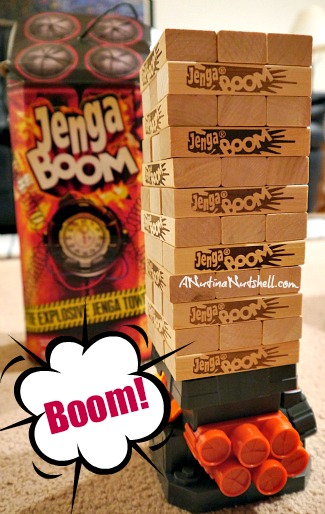 While the littlest kids will get a huge kick out of the blocks collapsing, older children and adults may find it more bothersome than exciting. I love the concept of the faster pressure-filled pace, but the timer went off so early into the game that it frustrated us more than it entertained us. We rebuilt the tower twice and then decided to play without using the timer, which ended up being a lot more fun.

I hope that future editions of Jenga Boom will be made with a longer timer or even with an option to adjust the time to account for different age levels and preferences. For those looking for a quick game (or adult drinking game) to play, this is a great choice, but for people who enjoy the strategy and skill involved, I’d recommend classic Jenga for a more relaxed and longer lasting game.

Buy It: Ages 6 and up, for 1 or more players. Available at nationwide toy retailers and online at Hasbro.com and Amazon

One lucky reader will win the game of Jenga Boom! 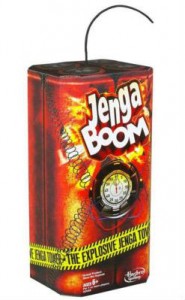 Products were provided. All opinions are my own.

RULES: Giveaway ends 11:59 pm ET, February 27, 2013. No purchase necessary. Open to legal residents of the fifty (50) United States and District of Columbia, Eighteen (18) years of age or older. Void where prohibited by law. One lucky winner will be chosen using random.org. One entry per household and IP address. The number of eligible entries received determines the odds of winning. Cheating will not be tolerated, and entries will be verified for accuracy. I will email the winner and they will have 48 hours to respond to the notification email, or a new winner will be chosen. Entering this giveaway means you are in agreement with this blog’s Terms of Use policy.