You are here: Home / SCRABBLE CatchPhrase Electronic Think Fast & Pass Game + Giveaway
As an Amazon Associate and member of other affiliate programs, I earn from qualifying purchases. 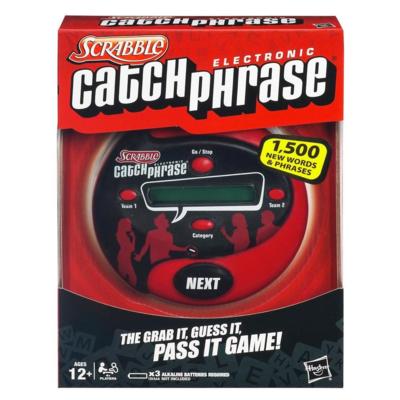 SCRABBLE CatchPhrase is a think fast game with a “hot potato” pace. However, I can’t for the life of me figure out why it has SCRABBLE in the name because I don’t see any connection to SCRABBLE at all in how it’s played. Maybe that it’s a word game?

Anyhow, the idea is to get your teammates to guess a word or phrase, then quickly pass the game before time runs out.

There are five different categories of words: Fun & Games, Entertainment, Everyday Life, The World, and Variety.

To start a round of play, press the Go/Stop button to begin the timer’s ticking.  A word or phrase from the chosen category will display, and the player attempts to get teammates to guess it by using physical gestures and/or verbal clues.

For instance, this is the entertainment category, and Rachael Ray is the word in play.

No rhyming, no giving the first letter of the word and no using parts of the word.

It’s tricky, but a whole lot of fun! 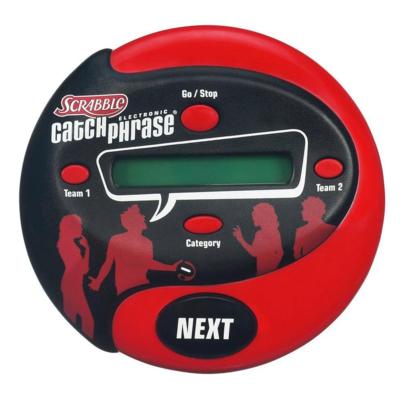 If the teammate guesses the word before time runs out, the game is quickly passed to the other team. They push the NEXT button for the next clue and do the same thing.

This goes on back and forth until time runs out and the buzzer sounds. The team not holding the game when it goes off automatically gets one point. (Scores are stored on the unit itself.) The game continues in rounds until one team reaches the winning score of 7 points.

It took us a few rounds of practice to get the hang of it, and then we played three games in a row because we liked it so much. It makes a great ice breaker for parties!

Because the game is team-based, you’ll need at least 4 people to play it. The age recommendation is 12 and up, and I definitely think the words and phrases are too complicated for anyone younger than that. Requires 3 AAA batteries.

Buy It: Look for SCRABBLE CatchPhrase at major retailers nationwide, and it can also be purchased directly from Hasbro Toy Shop for $22.99 or at Amazon

One lucky reader will win the SCRABBLE CatchPhrase electronic game from Hasbro.
a Rafflecopter giveaway

A sample was provided. All opinions are my own.

RULES: Giveaway ends 11:59 pm ET, November 26, 2012. No purchase necessary. Open to legal residents of the fifty (50) United States and District of Columbia, Eighteen (18) years of age or older. Void where prohibited by law. One lucky winner will be chosen using random.org. One entry per household and IP address. The number of eligible entries received determines the odds of winning. Cheating will not be tolerated, and entries will be verified for accuracy. I will email the winner and they will have 48 hours to respond to the notification email, or a new winner will be chosen. Entering this giveaway means you are in agreement with this blog’s Terms of Use policy.