You are here: Home / Twitter Party / Join Me For the #TysonMovieTicket Twitter Party!
As an Amazon Associate and member of other affiliate programs, I earn from qualifying purchases. 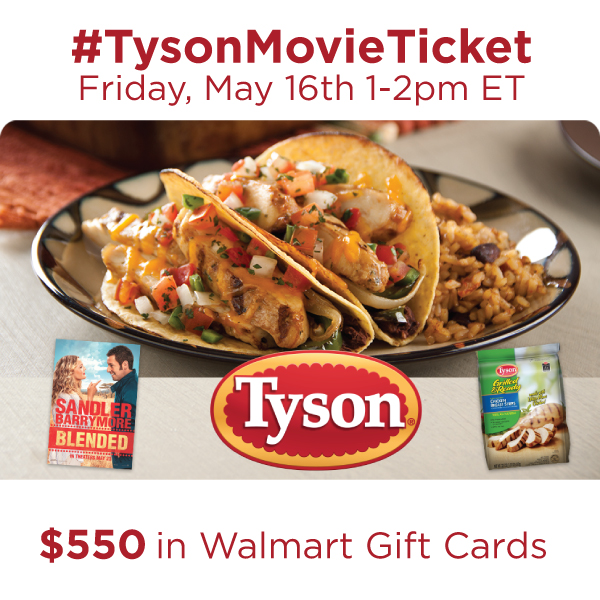 Do you love a good Twitter Party?  You know we do and we’re excited to host a party to celebrate Tyson Grilled & Ready and the upcoming Blended Movie!  On Friday, May 16th from 1-2 pm ET, please join us for the #TysonMovieTicket Twitter Party where we’ll be discussing how you can earn free tickets to Blended when you purchase two Tyson Grilled & Ready products, and give you a chance to win prizes!

After a long week of working from home, I love to escape the house and get out and do something fun! The #TysonMovieTicket offer is a win-win because I’ll have a quick dinner before the movie with Tyson Grilled & Ready chicken, and then I’ll use my free Blended movie tickets for a night out! Join us at the twitter party as we chat about this exciting offer. It promises to be a fun and tasty party!

Join me and RSVP for the #TysonMovieTicket Twitter Party on SoFabChats!

How To Participate In A Twitter Party on SoFabChats!

TIP: Want to win Twitter Party prizes? RSVP by clicking on RSVP button before you join the party, follow everyone on the Party Team, and tweet with the party hashtag during the party to be eligible!

TIP: Special deals and brand coupons? Keep that option checked when you RSVP for the party!

TIP: Where to find Twitter Parties? Check out the SoFabChats Twitter Party Calendar to find more fun parties to attend!