This post brought to you by Jel Sert. All opinions are 100% mine.

You could win a weekly prize, a first prize or a grand prize, and they all include Wyler's Light low-calorie, sugar-free drink refreshment. 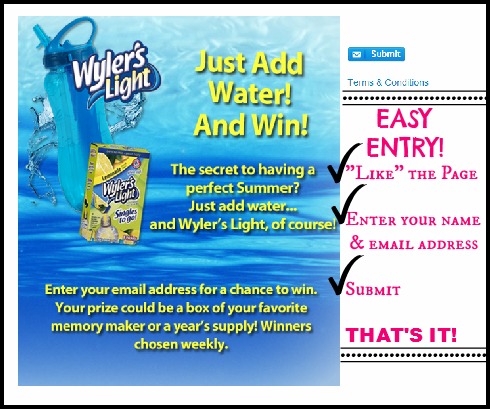 Have you tried Wyler's Light yet, by the way? Just add a single drink mix packet to a 16.9 oz bottle of water and shake it up. For a measly 5 calories, it turns flavor-less into flavor-full! Each box has eight flavor packets too, so the cost is more than reasonable.

If you're not that great about drinking enough water (all signs point to me), this makes it a heck of a lot more appealing.  If I add Wyler's Light to my water, I'll drink three (or four) bottles every day. (I re-use my water bottles, by the way.)

If I'm at home I just add a flavor pack to a large glass of water, mix it up and add ice. The iced tea with peach is especially good that way, and I enjoy sipping it while lounging in the backyard.

When I'm on the go I grab a water bottle, because not only is my speedometer broken in my car, but my A/C is as well, so liquid refreshment is my means of survival during the summer months.

Right now I have three tastes to try, but there are a rainbow of flavors from which to choose: 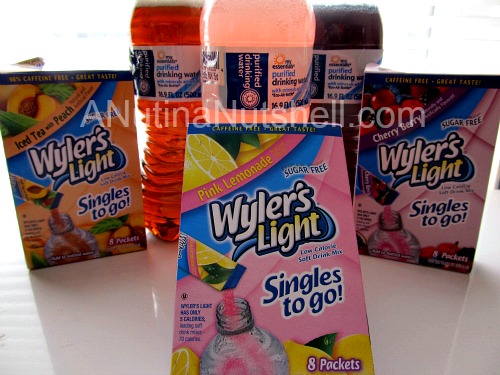 Follow @WylersLight on Twitter and Facebook.com/WylersLight and be sure to enter the Wyler's Light Just Add Water giveaway before it ends!