Day two in New Orleans started out with a little rain and by a little rain, I mean the sky emptied itself in a torrential and relentless deluge. (Mind you that rain was not in the forecast at all. I’m talking ZERO chance of precipitation.) Hmmmmph.

We carried on with our plans to tour Lafayette Cemetery No. 1 and the Garden District in hopes that the rain would let up. (Spoiler alert: it didn’t, and we got wet.)

Somehow my daughter managed to look adorable in spite of it all. 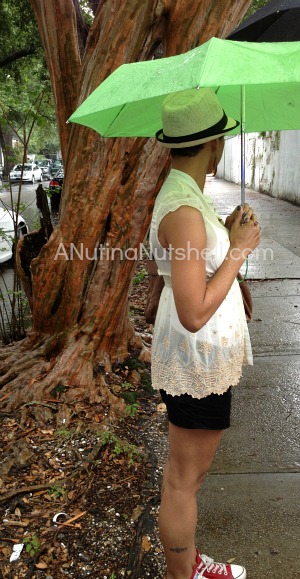 Because New Orleans is below sea level, its burial grounds are not. Makes sense, right? 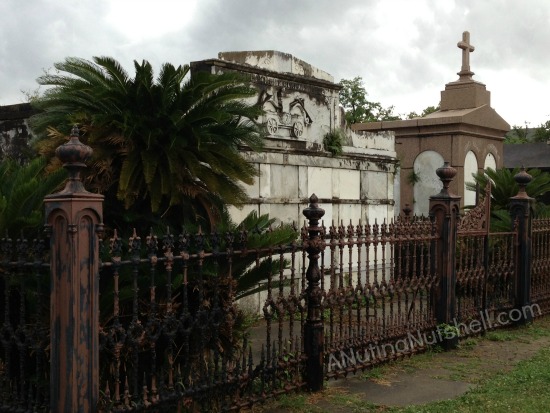 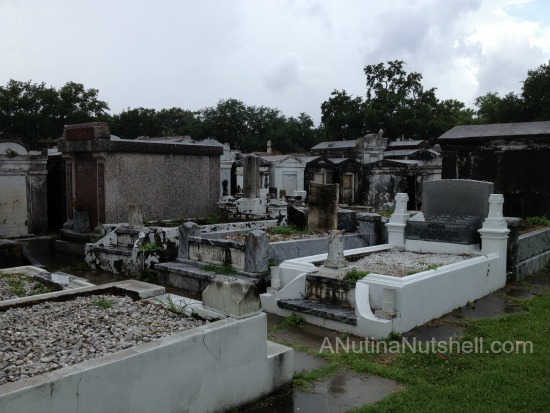 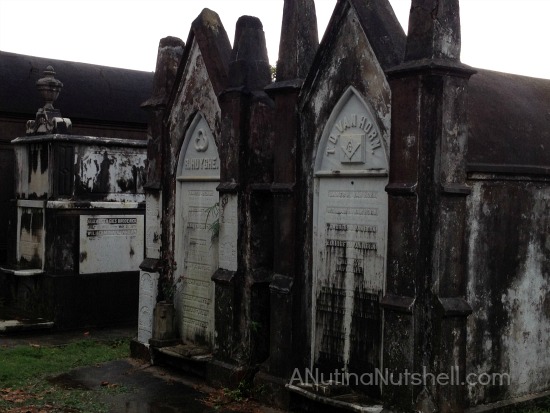 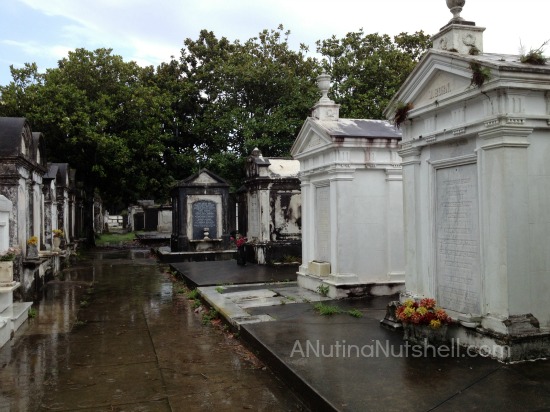 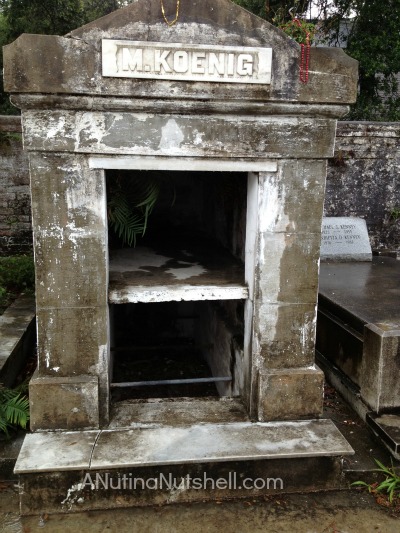 The cemetery was the setting for the movies “Double Jeopardy,” “Dracula 2000,” and “Interview with a Vampire”, and if you saw the latter, you may recognize this as Vampire Lestat’s tomb. 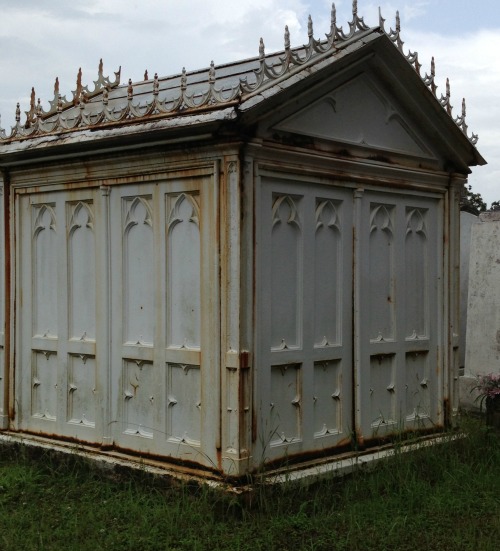 A guided tour is best for viewing the cemeteries as the fascinating bits of family history and info about burial styles and traditions is something you can’t pick up on your own from just walking the grounds.

Since Lafayette Cemetery No. 1 is located in the heart of the Garden District, we continued our tour by strolling the surrounding neighborhood’s elegant and historic homes.

But yes, it was still pouring. *sigh* 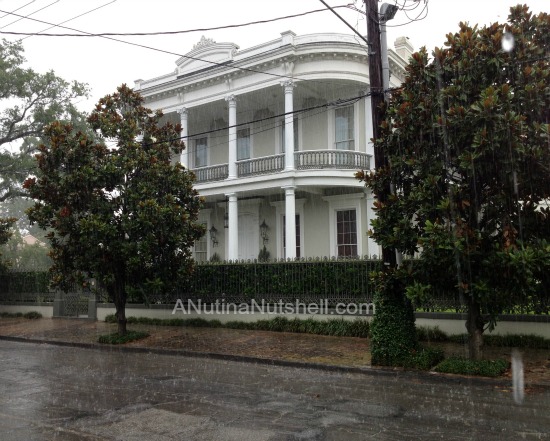 This is John Goodman’s home, and when we walked up someone was opening the front door, but quickly shut it when they saw our tour group out front. 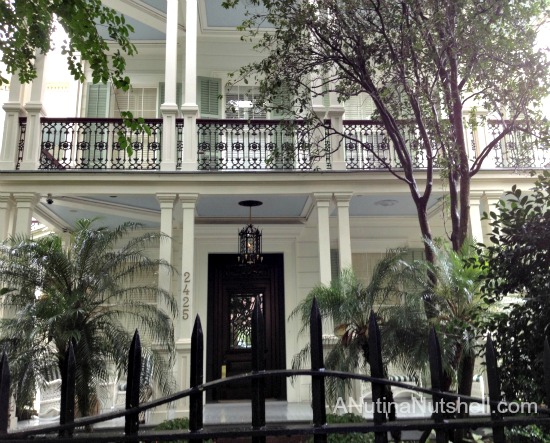 This is where Sandra Bullock lived during her marriage to Jesse James. 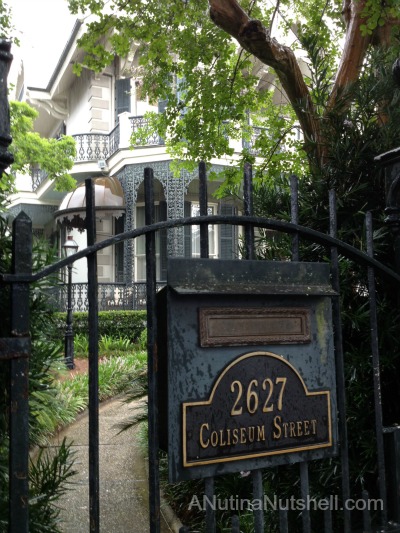 It’s also where my daughter found a tiny snail friend. 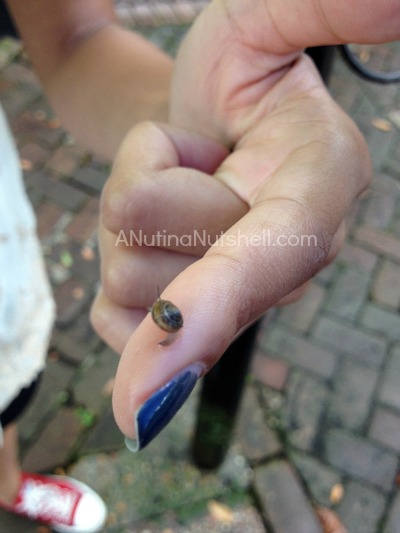 The tour guide told us so many interesting details about the homes and the styles of architecture. I am definitely going to repeat the tour on my next trip to New Orleans and on a clear day. 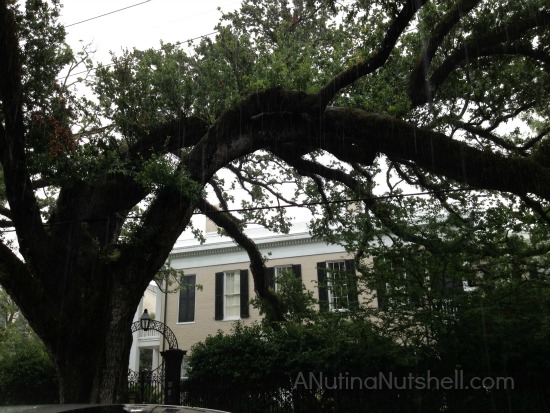 Afterwards we had originally planned to head straight to Magazine Street, which is near the Garden District, but we were sopping wet so we hopped the streetcar back to the hotel to change into dry clothes first, waited the rain out and then headed back.

Once we reached Magazine Street, there were tons of restaurants and fun little shops to peek inside. I found my first souvenir in one of the shops: this pair of sterling silver fleur de lis earrings. They weren’t cheap, but I love them.

We also happened past a group of musicians as we strolled down the street. 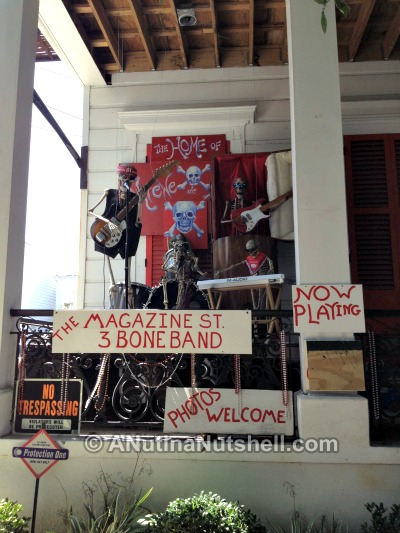 We decided to eat lunch at a restaurant called Ignatius. I had never had a po’ boy sandwich before so I ordered a roast beef po’ boy, and it was craaaaaaazy good! My daughter ordered a Fried Green Tomato Salad and she loved that too. 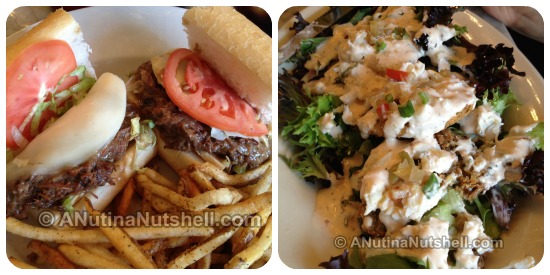 Since you can’t go to New Orleans without trying a New Orleans Snoball, we did! We stopped at SnoWizard and I can’t even describe to you how yummy they are. It’s the only icy treat I’ve ever eaten where the juice lasted all the way to the last bite! My daughter had key lime pie and I had root beer. 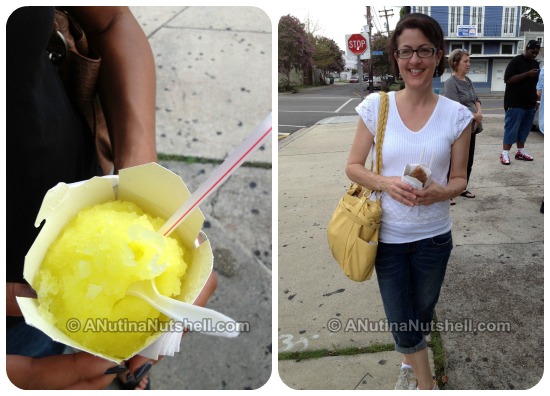 We decided to go back to the hotel where my daughter would take her daily afternoon swim and then we’d both take a nap. When we woke up, we walked over to the Haunted History Tours starting point at Rev. Zombie’s Voodoo Shop. 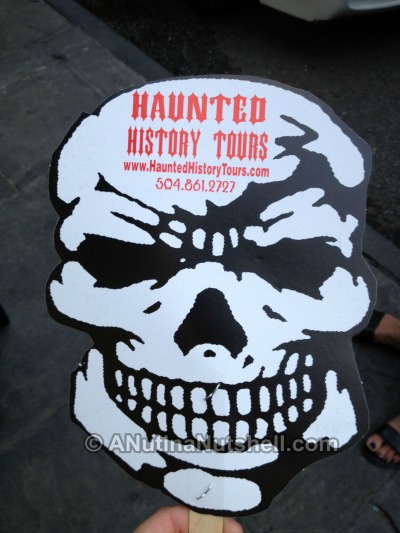 This was our tour guide who was full of haunted tales about the city. We took the 8pm tour so that it would be dark and spooky, but in reality these kinds of tours are more amusing and theatrical in style. 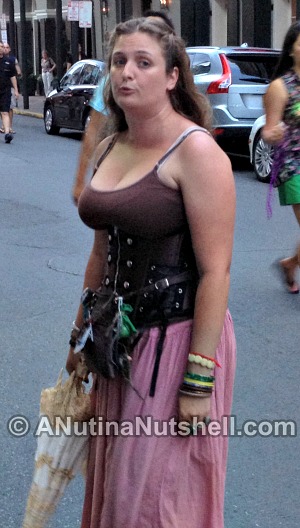 This was the building where Lestat the vampire was set on fire in the movie “Interview with a Vampire”. She told us to take lots of pictures of the balconies in the buildings she showed us as sometimes ghosts can be seen in the photos. 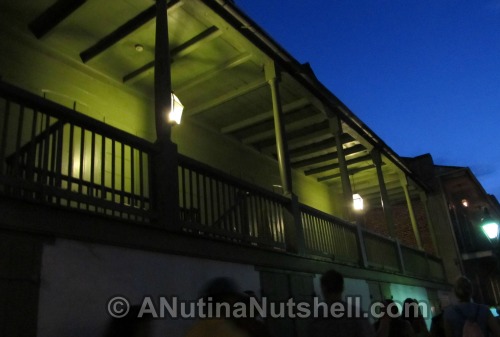 They say the ghost of a woman named Julie can be seen on the roof of this building sometimes. She was a Frenchman’s mistress in a love story gone wrong. 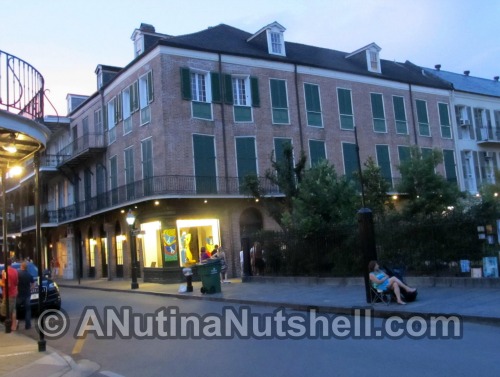 And the creepiest story of all was about the Lalaurie Mansion. Horrific real life events took place there, so no wonder it’s haunted! 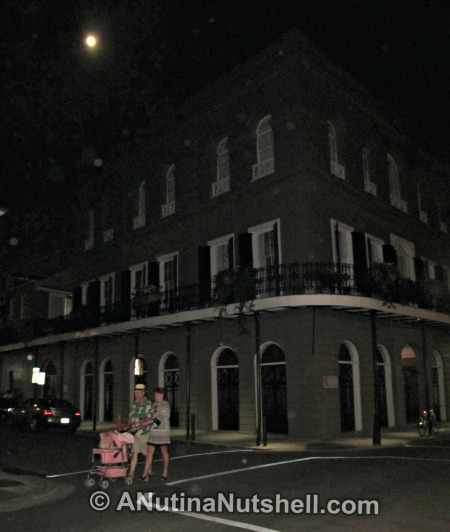 One of the stops on the tour was at Lafitte’s Blacksmith Shop, the oldest bar in America, and it’s lit by candlelight. They also serve a Purple Voodoo, a grape slushy for the over 21 crowd. My daughter and I thoroughly enjoyed them! 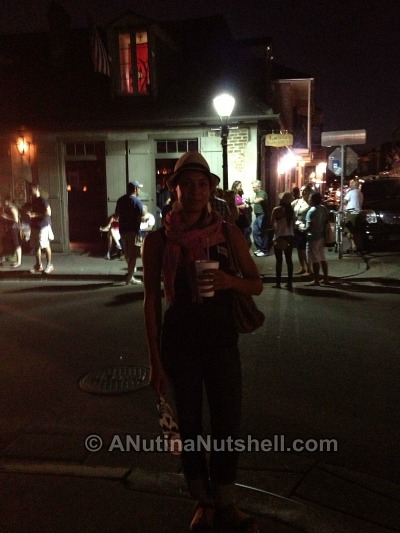 The tour was really interesting and entertaining, well worth taking. After it ended, we were pretty whooped from an entire day on our feet, so we went back to the hotel and crashed for the night.

Up next: Day Three