As an Amazon Associate and member of other affiliate programs, I earn from qualifying purchases.
40shares

This graham cracker house made with cereal is sponsored by Kellogg’s. All opinions are my own.

I love the holidays because my inner child has free rein to play, bake, decorate and craft all the things. I have endless lists of ideas! Truth be told, I’ve never been someone who gets bored. I’m lucky like that.

But I know most people do get bored, especially kids. My son used to repeat the daily (sometimes more often) sing-song refrain of “What should I do?” so many times that he eventually shortened it to “WSID?” The brain chafing I experienced from hearing that ALL THE TIME is still healing… decades later.

The boredom starts during the post-holiday winter break when the novelty of their new gifts wears off. It’s normal, and it can be tough for parents. But, no worries; I got you covered.

Grab a big box of Raisin Bran and get crafting.

You can make a graham cracker house like I did. It’s a little beach house. Isn’t it cute! 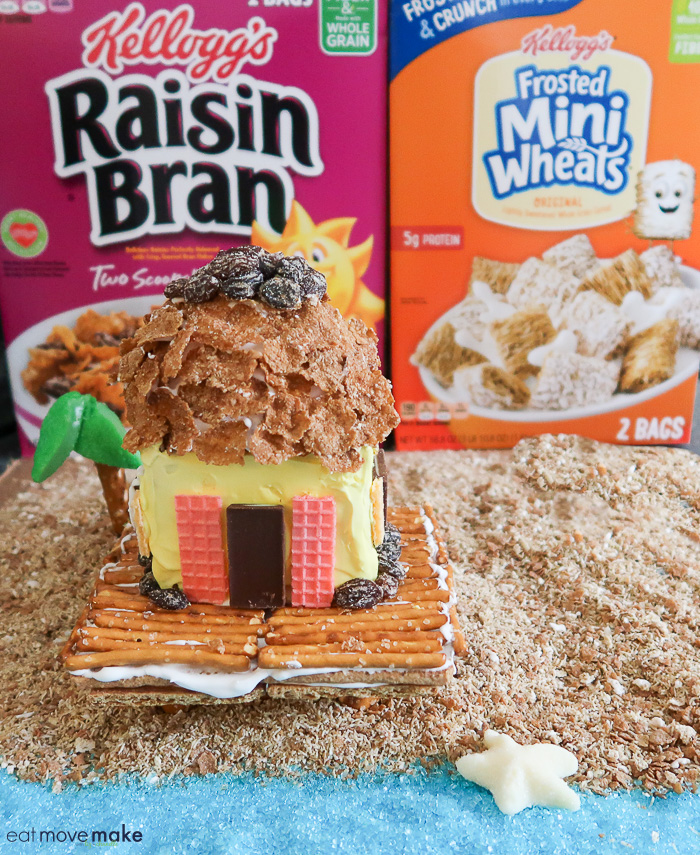 Crafting with cereal is the new boredom buster, and it’ll entertain the kids (and you) for hours. Think outside the (cereal) box!

I recommend getting the big boxes of cereal at Sam’s Club. They come with two big bags of cereal in each box, so you can use one for crafting and one for eating. It’s a total win-win especially when you factor in the price savings.

I bought Kellogg’s Raisin Bran, Frosted Mini Wheats and Froot Loops, but Raisin Bran was my initial inspiration for the craft project. I knew the bran flakes would make perfect roof shingles! 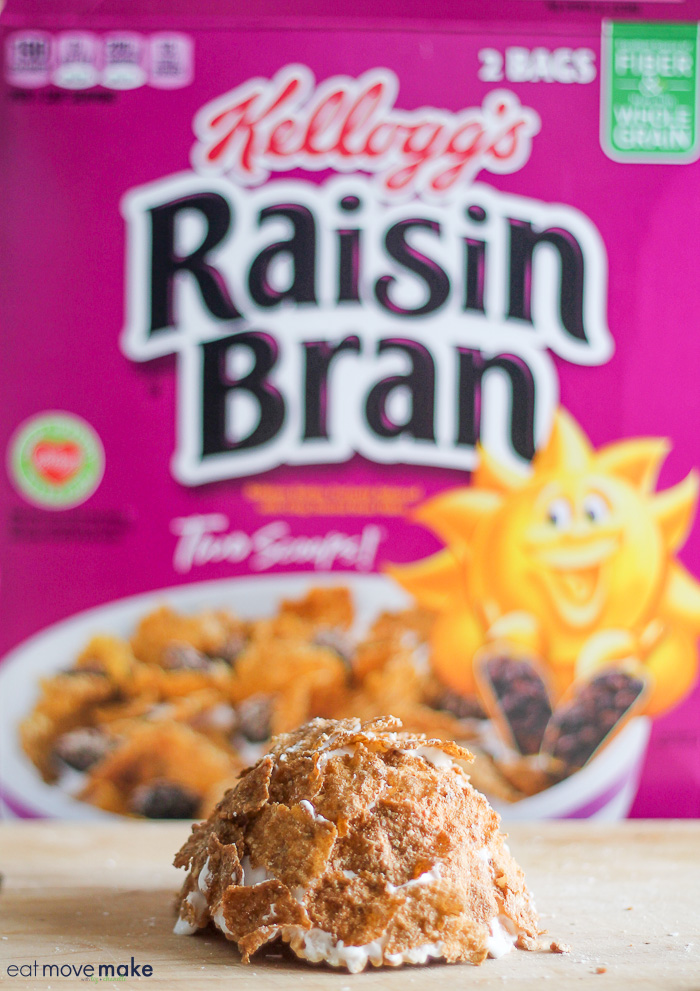 So here’s how to make a graham cracker house (beach house) using cereal.

Note: When I use the word “glue”, I’m referring to royal icing, not actual glue.

Start with a sturdy cardboard base for support, and prepare a batch of royal icing. I made mine with meringue powder for extra cementing, and I glued together a raft-like beach house foundation made with two whole sheets of graham crackers criss-cross glued on top of each other.

Next, I glued three rows of three pretzel nuggets (of the same length) to one side of the foundation and let that set up. Then I glued pretzel sticks along the top and sides of the foundation. I let this whole base dry for a couple hours.

While it was drying, I painted the outside of a waffle bowl with royal icing and began to apply Raisin Bran shingles.

Then I glued four half graham cracker sheets into a square shape to form the house and painted the outside with yellow-tinted icing. 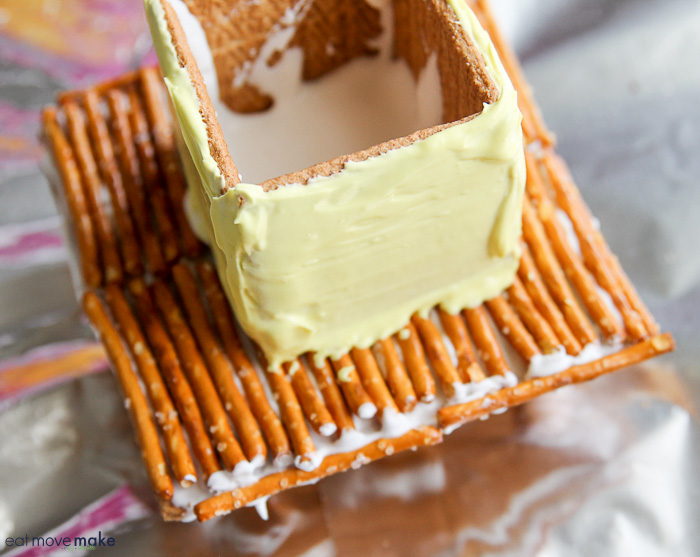 For the windows and doors, I used mini chocolate bars and painted on white icing for panes. I trimmed thin sheets of wafer cookies for the shutters.

And I added raisins to make a dome on the roof and lined the beach house foundation with them too. 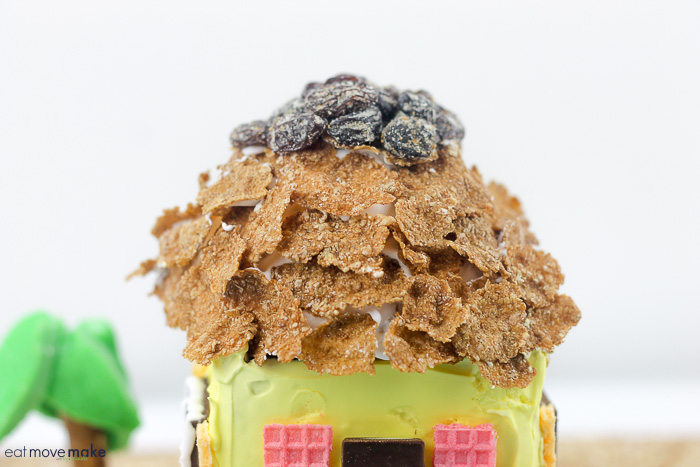 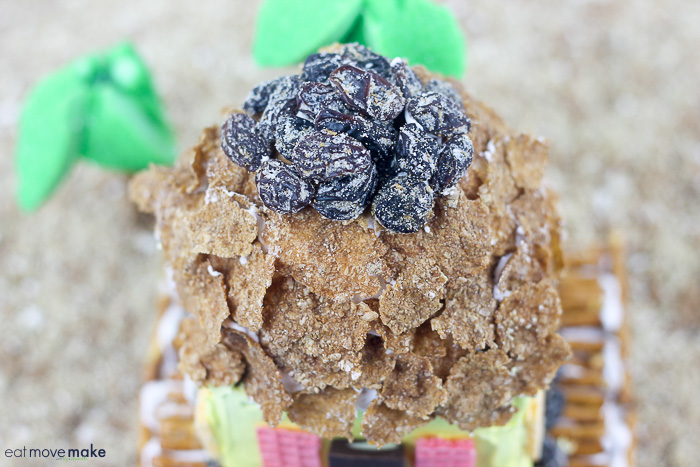 For the sand, I ground up two batches of a half and half mixture of Raisin Bran flakes and Frosted Mini Wheats in a food processor.  The combination of cereals gives the sand interesting color and texture. 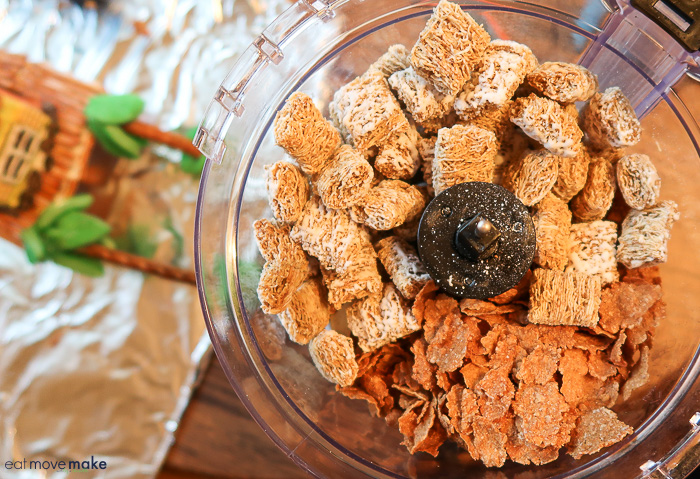 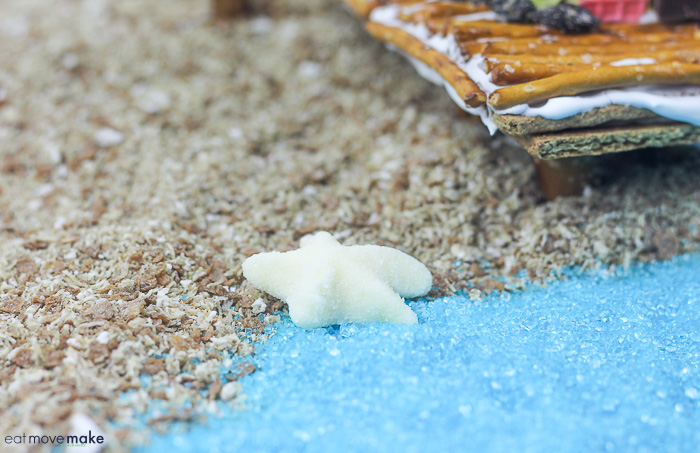 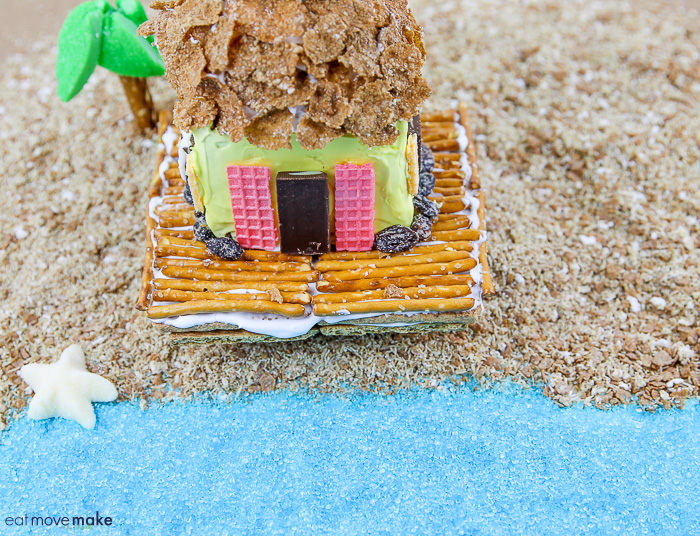 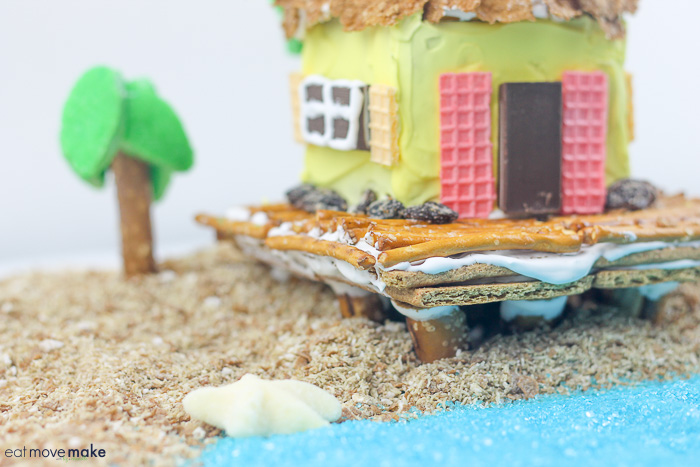 For the final touch to my little island paradise, I trimmed green apple gummy candy into leaf shapes with kitchen shears and attached them to pretzel rods which I buried under the sand behind the beach house. 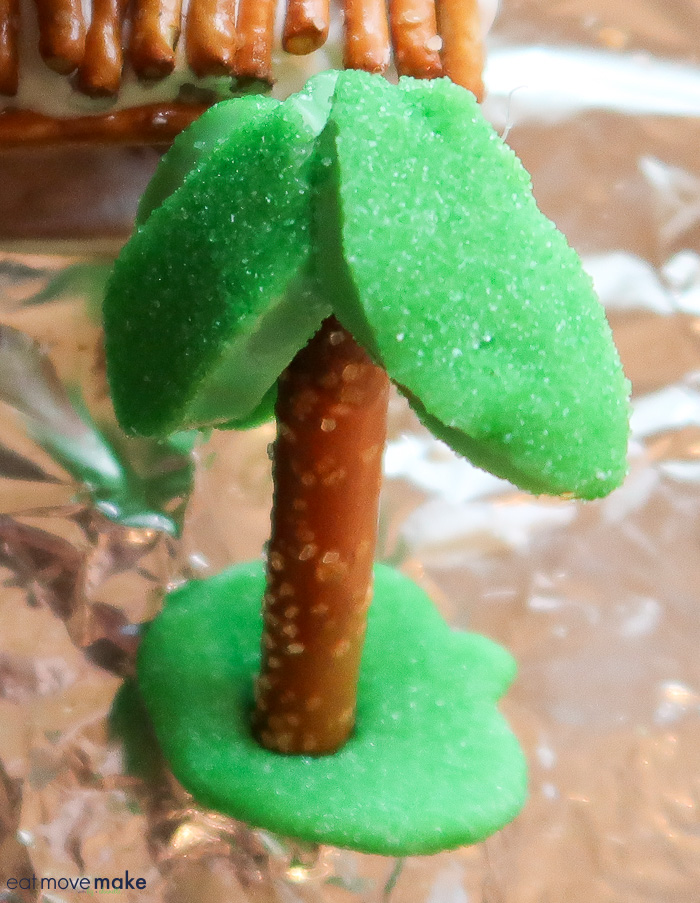 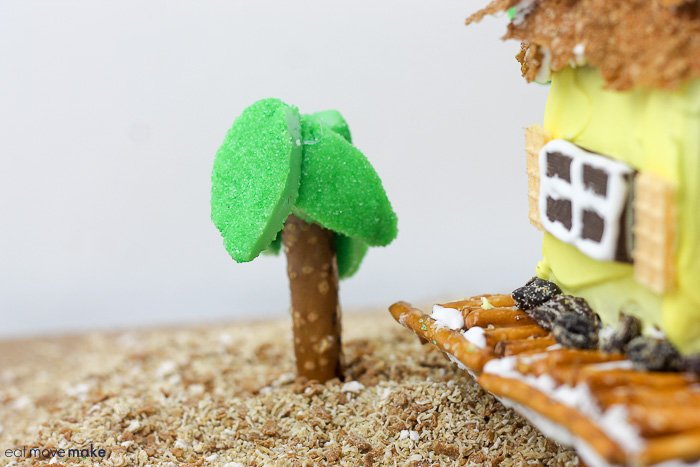 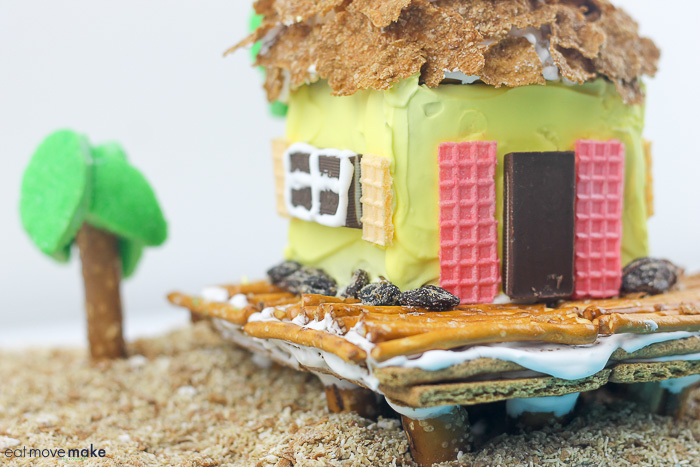 I love my little graham cracker house beach house! It was so much fun to make! 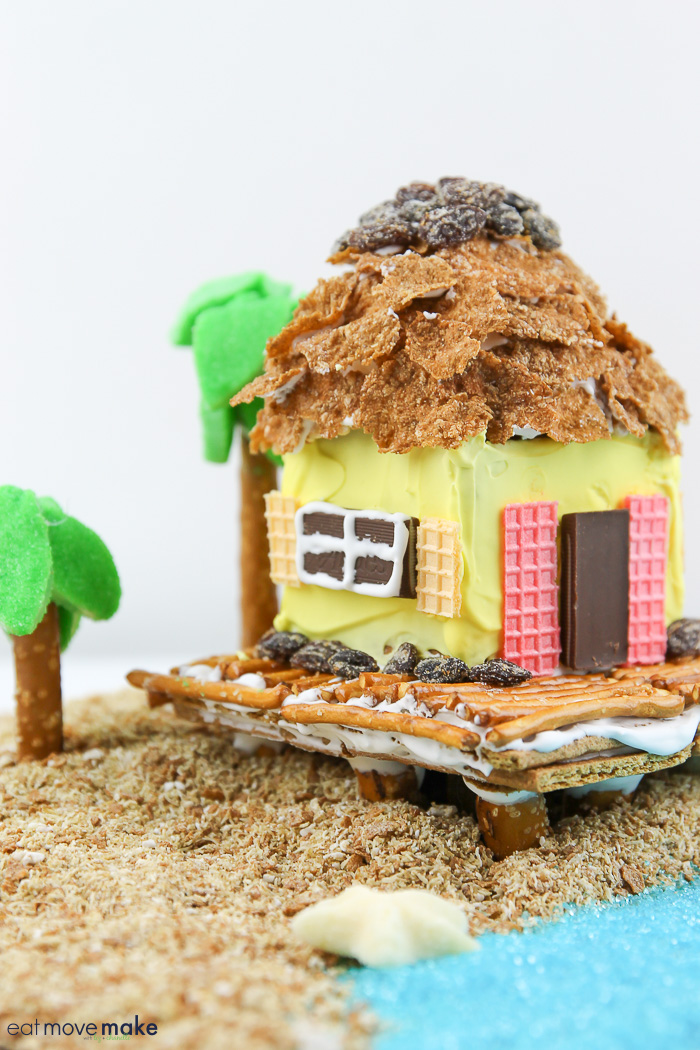 The best part about making this graham cracker house is that you can do it your way. You’re only limited by your own imagination, so use the bits of cereal in any way you want! (And feel free to enjoy them as snacks while you create.) 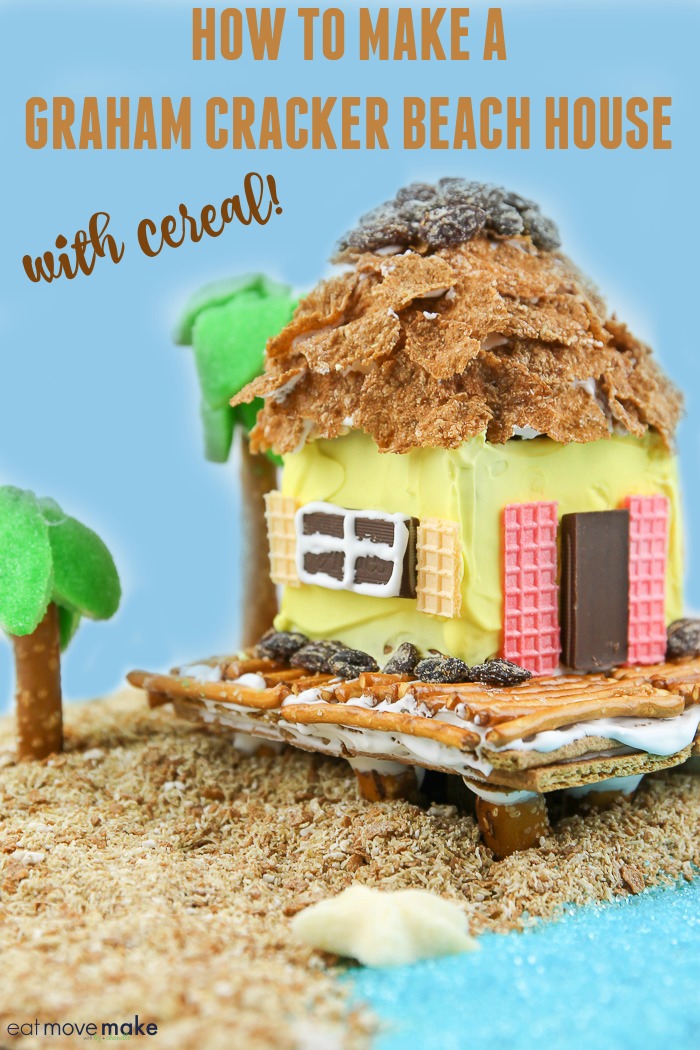